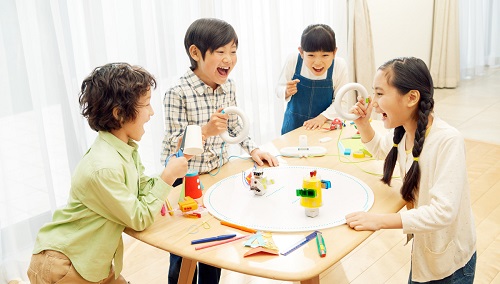 Toio is controlled via handheld rings or can be programmed by kids separately. Source: SonyGetting children involved in STEAM (science, technology, electronics, art and music) projects at an early age is sometimes a difficult process.

Sony is looking to make that process much easier with its Toio educational robotics kit for young programmers. Toio is a pair of small cube robots that roll around on a flat surface. They are controlled by using handheld rings or kids can use simple programming language and watch the cubes perform.

A recent video released by Sony shows how the cube robots interact with each other through a series of experiments involving paper cutouts. In one test, the cubes are fitted with a paper pair of pants and “walk” similar to real feet. In another test, paper arms are fastened to cubes to form a robot gripper. In another, the cubes act like an inchworm with a simple piece of paper attached. More complex cutouts allow the cubes to act like an alligator. In another, one cube tries to find the other on a surface indicating there may be some cameras installed in the devices.

Right now, Sony is not revealing exactly what is inside the Toio but it did recently show it off at the Tokyo Toy Show where kids were allowed to use the cube robots to battle each other.

The robots are charged in a base station that is included in the Toio kit, which is priced at about $200. Currently, Toio is only available in Japan with limited orders being accepted. General sale for the device will begin in December. There is no word on when a worldwide release will take place.