Researchers Create FlatCam - A Tiny Camera Without a Lens

Rice University researchers have developed patented prototypes of their technological breakthrough—a thin sensor chip with a mask that replaces lenses in a traditional camera.

FlatCam was invented by the Rice labs of electrical and computer engineers, RichardBaraniuk and AshokVeeraraghavan, and employs sophisticated computer algorithms that process what the sensor detects and converts the sensor measurements into images and videos.

Even though traditional cameras are shrinking in size, especially due to their incorporation in smartphones, they still require lenses. The assembly required to integrate lenses into these cameras is raising their cost, according to the researchers.

FlatCam eliminates these lens issues in a camera, and is also thin and flexible enough for applications that traditional devices cannot serve. It can be created quickly and inexpensively like microchips. The team’s most recent prototype is even thinner than a dime. 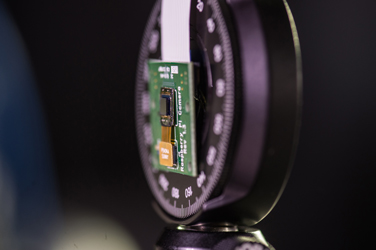 Rice University’s FlatCam—the tiny chip attached to the circuit board—is a lens-less camera that may someday turn large or small surfaces into cameras. Image credit: Jeff Fitlow/Rice University “As traditional cameras get smaller, their sensors also get smaller, and this means they collect very little light,” says Veeraraghavan. “The low-light performance of a camera is tied to the surface area of the sensor. Unfortunately, since all camera designs are basically cubes, surface area is tied to thickness.”

“Our design decouples the two parameters, providing the ability to utilize the enhanced light-collection abilities of large sensors with a really thin device,” says Veeraraghavan.

The breakthrough shifts the traditional cube design of a camera to just a surface without sacrificing performance, according to the team.

“We can make curved cameras, or wallpaper that’s actually a camera. You can have a camera on your credit card or a camera in an ultra-thin tablet computer,” says Veeraraghava.

The idea for the FlatCam comes from the lens-less pinhole camera, but instead of a single hole, it features a grid-like coded mask positioned very close to the sensor. Each aperture allows a slightly different set of light data to reach the sensor. Raw data sent to the back-end processor (the team used a desktop computer) is sorted into an image.

Like much larger light field cameras, the picture can be focused to different depths after the data is collected.

Rice’s prototypes use off-the-shelf sensors and produce 512-by-512 images in seconds, but the researchers expect that resolution will improve as more advanced manufacturing techniques and reconstruction algorithms are developed.

The prototypes do not have viewfinders since the team claims that many applications will not need one and a cellphone screen may eventually serve the purpose.

Potential applications for FlatCams include use in security or disaster-relief and as flexible, foldable wearable and even disposable cameras.

The research team will present its work at the Extreme Imaging Workshop in December in Santiago, Chile, and has published a paper available via the online service ArXiv.