'Miracle Material' May Pave the Way for Exponential Data-Processing Increases 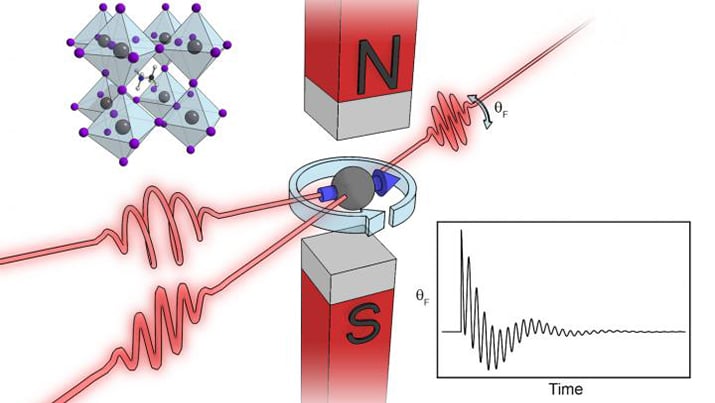 Researchers Sarah Li and Z. Valy Vardeny employed an ultrafast laser to study the use of organic-inorganic hybrid perovskites as a material class for the emerging field of spintronics. (Credit: University of Utah)As electronic devices become more compact, the silicon transistors inside that control the flow of electrical currents must work in smaller and smaller areas. Existing technology, based on the electron charge, is beginning to reach its size limit.

Enter spintronics, also known as spin transport electronics or fluxtronics, a research field that offers the promise of overcoming that limit. Spintronics looks at the directional alignment of each electron relative to an element’s nucleus — if spin orientation is “up,” it represents a 1; if “down,” it represents a 0 — in order to process exponentially more information.

For spintronic devices to work, electron spin must be easily controllable and of sufficient duration to transport information. These two properties are seemingly contradictory, however; it’s easier to manipulate the spin of a heavier atom, but greater weight should mean shorter spin duration, also known as “spin lifetime.”

As published in Nature Physics, the new study shows that organic-inorganic hybrid perovskites — already studied for their remarkable efficiency at converting sunlight into electricity — possess both properties.

"It's a device that people always wanted to make, but there are big challenges in finding a material that can be manipulated and, at the same time, have a long spin lifetime," said Sarah Li, assistant professor in the University of Utah Department of Physics & Astronomy and lead author of the study. "It's the property of the material itself that satisfies both."

In their experiment, the researchers formed a thin film from the hybrid perovskite methyl-ammonium lead iodine and placed it in front of an ultrafast laser that shoots very short light pulses at a rate of 80 million times per second. They split the laser into two beams; the first to set the electron spin in the desired direction, and the second to bend through a series of mirrors and hit the film at increasing time intervals as a way of measuring spin duration.

They found that the perovskite’s spin lifetime was surprisingly long — up to nanosecond. The spin flips many times during that nanosecond, meaning that a lot of information can be easily stored and manipulated. A further test to determine how well the spin could be manipulated with a magnetic field showed promising results.

Vardeny says the potential for the material is enormous, including faster data processing and increased random-access memory. He even goes so far as to refer to the perovskite as a “miracle material.”