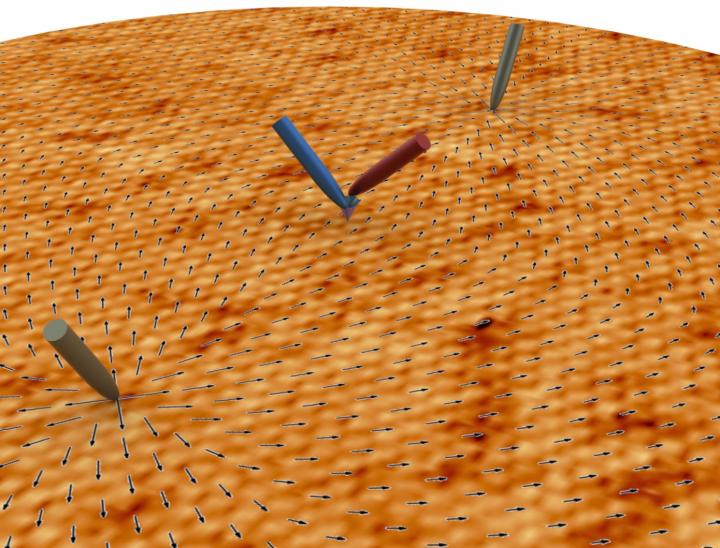 A new microscopy method developed by an ORNL-led team has four movable probing tips, is sensitive to the spin of moving electrons and produces high-resolution results. Using this approach, they observed the spin behavior of electrons on the surface of a quantum material. Source: Saban Hus and An-Ping Li/Oak Ridge National Laboratory, U.S. Dept. of Energy

A new method that measures the cryptic behavior and magnetic properties of electrons flowing across the surface of quantum materials, found it could open the path for next-generation electronics.

At the heart of electronics devices are silicon-based semiconductors that rely on the controlled electrical current responsible for powering electronics. These semiconductors can only access the electrons’ charge for energy but electrons do more than just carry a charge. They have intrinsic angular momentum, known as spin, which is a feature of quantum materials that can be manipulated to enhance electronic devices.

The research team of scientists was led by An-Ping at the Department of Energy’s Oak Ridge National Laboratory. They developed an innovative microscopy technique to detect the spin of electrons in topological insulators, a new kind of quantum material that could be used in applications like spintronic and quantum computing.

"The spin current, namely the total angular momentum of moving electrons, is a behavior in topological insulators that could not be accounted for until a spin-sensitive method was developed," Li said.

Electronics devices evolve rapidly and require more power packed into smaller components. This prompts the need for less costly, energy-efficient alternatives to charge-based electronics. A topical insulator carries electrical current along its surface, while deeper within the bulk material acts as an insulator. Electrons flowing across the material’s surface exhibit uniform spin directions, unlike in a semiconductor where electrons spin in varying directions.

"Charge-based devices are less energy efficient than spin-based ones," said Li. "For spins to be useful, we need to control both their flow and orientation."

To detect and better understand the quirky particle behavior, the team needed a method sensitive to the spin of moving electrons. The new microscopy approach was tested on a single crystal of Bi₂Te₂Se, a material that contains bismuth, tellurium and selenium. It measured how much voltage was produced along the material’s surface as the flow of electrons moved between specific points while sensing the voltage for each electron’s spin.

The new method builds on a four-probe scanning tunneling microscope — an instrument that can pinpoint a material’s atomic activity with four movable probing tips — by adding a component to observe the spin behavior or electrons on the material’s surface. The approach includes spin sensitivity measurements. It also confines the current to a small area on the surface, which helps to keep electrons from escaping beneath the surface, providing high-resolution results.

"We successfully detected a voltage generated by the electron's spin current," said Li, "This work provides clear evidence of the spin current in topological insulators and opens a new avenue to study other quantum materials that could ultimately be applied in next-generation electronic devices."

A paper on this research was published in Physical Review Letters.