Video: 3-D Printed Stretchable Skin Could Give Robots a Sense of Touch 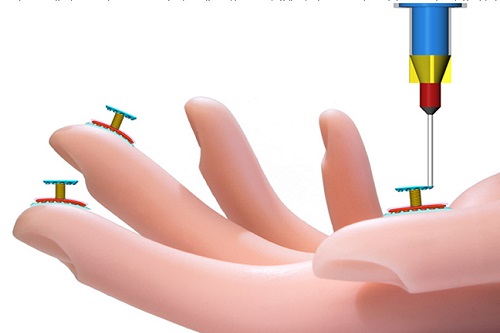 An in-house built 3-D printed was developed to print touch sensors directly on a model hand. Source: University of MinnesotaOne the main challenge to developing robots that can lead to helping humanity in terms of healthcare or manufacturing or other industries is the inability to sense touch like real human skin.

Engineers at the University of Minnesota believe they have developed a new process that may one day lead to the printing of electronics for robots that will give them the ability to feel their environment.

The process involves 3-D printing to create stretchable electronic sensory devices that can be used as a bionic skin for tactile touch.

“This stretchable electronic fabric we developed has many practical uses,” says Michael McAlpine, a University of Minnesota mechanical engineering associate professor. “Putting this type of 'bionic skin' on surgical robots would give surgeons the ability to actually feel during minimally invasive surgeries, which would make surgery easier instead of just using cameras like they do now. These sensors could also make it easier for other robots to walk and interact with their environment.”

The stretchable sensory devices could also be used to print electronics on real human skin allowing for a new wave of wearables that could be used in health monitoring or by soldiers in the field to detect chemicals or explosives. While the engineers have yet to print on human skin, they were able to print directly on a curved surface of a model hand and also interfaced a printed device with skin where they were able to detect a pulse in real time.

The UM engineers used a sensing fabric with an in-house built 3-D printer that has four nozzles to print the various specialized “inks” that made up the layers of the device. These included a base layer of silicone, top and bottom electrodes made of a conducting ink, a coil-shaped pressure sensor and a layer to hold the top layer in place while it sets. The last layer was later washed away in the final process.

“This is a completely new way to approach 3-D printing of electronics,” McAlpine says. “We have a multifunctional printer that can print several layers to make these flexible sensory devices. This could take us into so many directions from health monitoring to energy harvesting to chemical sensing.”

The next step is to move toward developing semiconductor inks and printing on a real body.

For the complete research results visit the journal Advanced Materials.