Light-emitting diode (LED) lighting is making sweeping changes worldwide in terms of how lighting is used for the workplace, on the street, in sports complexes, in the home and how food is being grown.

Philips took horticultural LED lighting to the next level with a project involving two Japanese vertical farm customers using its GreenPower LED lights. The results of the project were announced this week following a 14-month trial with Innovatus Inc. and a 10-month trial at Delicious Cook Company Ltd. 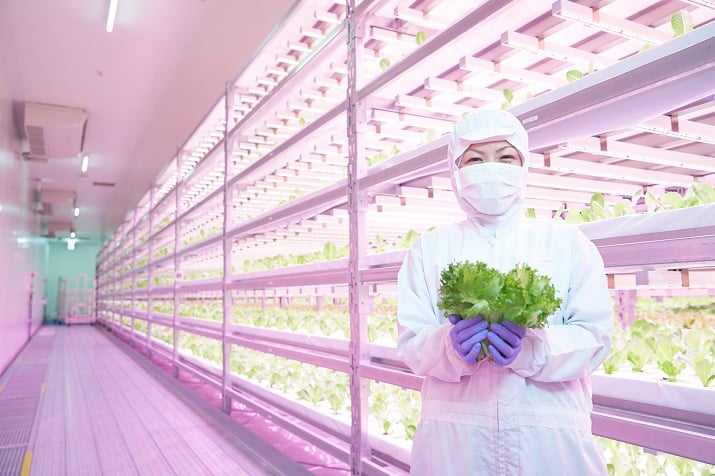 Innovatus Inc. is using Philips Greenpower LED lighting to grow lettuce, producing about 12,000 heads every day. Source: Philips Vertical farms are controlled facilities where vegetables and herbs are grown in stacked layers without the use of daylight. This method allows farmers to grow plants with the right light recipe, the ideal temperature, the right amount of water and CO2, and the best growing medium. Vertical farming lends itself to being cleaner because it does not involve pesticides and the yields are generally higher with less waste.

Philips says Japanese consumers are looking for a diverse variety of foods that are safe and nutritious while still being reasonably priced. “Vertical farms are an ideal way to meet this growing demand for safe, fresh food, especially in a country with highly urbanized areas where space is at a premium,” says Udo van Slooten, business leader for Philips Lighting’s horticulture business. Not surprisingly, Japan has become one of the fastest-growing markets for horticultural LED systems.

The first trial project for Philips’ LED lighting was Innovatus, which houses one of the largest, completely closed-environment, vertical farms in the world using horticultural LED lighting. The trial began in March of 2015 and now the company is producing 12,000 heads of lettuce per day.

Hitoshi Wada, director at Innovatus, says the company uses Philips’ GreenPower LED system to grow five varieties of lettuces, mainly frilled lettuce, green leaf and romaine. The process uses only a fraction of the water compared to lettuces grown in open fields. “The quality and control it has given us with our lettuce crops has enabled us to get lettuces to Tokyo supermarkets in just two hours after shipment,” Wada says. “Furthermore, as the lettuces are grown and packaged in an extremely hygienic environment, there is no need to wash them before eating.” 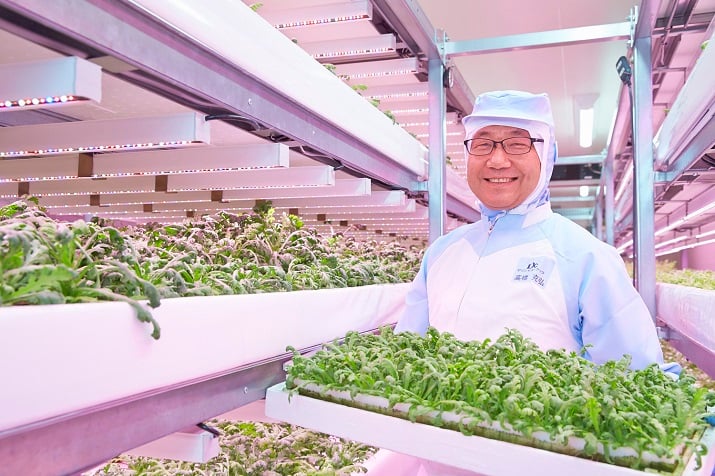 The 80-square-meter facility has three layers in a total cultivation area and allows Delicious Cook to try out horticultural light recipes in order to increase yield and differentiate crop tastes, the company says. Delicious Cook has been changing its strategy from using externally produced food to food grown safely indoors. The switch to LED lighting inside its farm allows the company to produce food year-round and avoid sourcing it from external suppliers, the company says.

Engineering Newsletter Signup
Features the top stories, latest news, charts, insights and more on the end-to-end electronics value chain.
This email is already in use. Please sign in here
Advertisement
Weekly Newsletter
Get news, research, and analysis
on the Electronics industry in your
inbox every week - for FREE
Sign up for our FREE eNewsletter
Get the Free eNewsletter
Advertisement
Popular News
1.
Video: Watch a 4-seater air taxi take its first flight
2.
5G vulnerabilities call for automated platform, continuous testing
3.
How AR fits into Industry 4.0
4.
Automated driving technology: Should we go for it?
5.
What rising chip manufacturing prices mean to consumers
Find Free Electronics Datasheets