Kids love video games. When playing the games, they usually want to be the best.

But sometimes that comes at the expense of education or learning, specifically when it comes to important subjects such as science, technology, electronics or math. That’s where MAKERbuino comes in.

MAKERbuino is a do-it-yourself educational device disguised as a video game console.

MAKERbuino comes as an unassembled kit with a box full of electronic components necessary to build a portable gaming machine. Powered by an ATmgea328p-pu processor, the same chip used on an Arduino UNO board, the developers claim it is easy enough that families can put together themselves or even kids can do on their own with adult supervision.

The device is made of easy-to-find and cheap components and users only need a regular soldering iron, diagonal cuter pliers, screwdriver and desoldering vacuum pump to create the portable gaming console. For those that do not have these tools, MAKERbuino is offering kits that include the tools as part of the kit to put together the console. 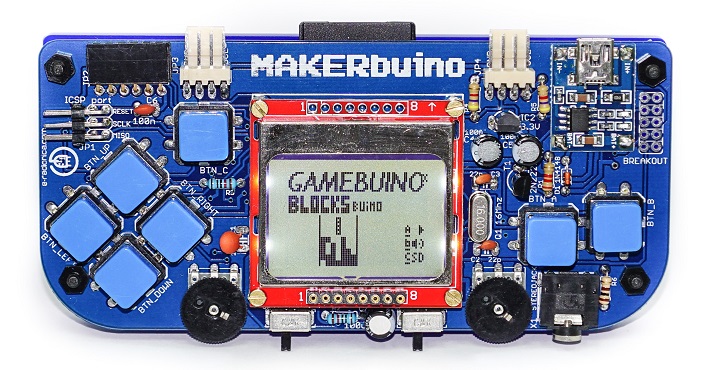 Based on the ATmgea328-p-pu processor, MAKERbuino can be put together with a few tools in about 5 hours. Source: MAKERbuinoWhat Can Be Played

Built with an SD card loaded with retro games, users can play games as soon as the device is assembled and more games can be downloaded from an online games gallery.

Users can also take the code of every compatible game and change the code or take parts of the game code to create a new game project. Then these new games can be shared with other MAKERbuino users.

The programming tool kit that comes in the Arduino library was made for programming video games and includes in-game menus and other GUI-related content, sound FX and background music, animated bitmaps that can be drawn and the ability to emulate MAKERbuino games on a desktop PC.

What Can Be Learned

The developers of the portable game console built MAKERbuino with the idea of catering to 11-year-olds and up with help from an adult. The build time is about five hours depending on skill. But also give kids their first experience in building electronics and learning about tools used in making these devices.

Kids can learn how to solder, how electronic components get connected and why, what microcontrollers are and the basics of digital electronics, how to program a microcontroller in C/C++, what are 3-D printers and how to modify and design 3-D printed casing and how to add new capabilities to the portable gaming device through expansion modules. 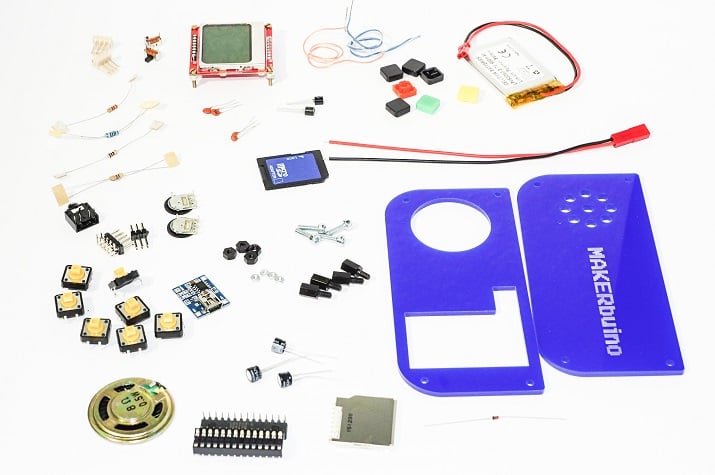 Because it is open-source and hackable, users can tinker with the hardware and software included in the kit for their own designs. Source: MAKERbuino
The design kit is hackable as it is compatible with other hardware expansion modules allowing tinkerers to plug in light emitting diodes (LEDs), switches or photoresistors or even more complicated modules such as accelerometers, gyroscopes or RF transceivers. The hackable nature of the kit allows consumers to explore new hardware options, learn about the board or change the board around to connect a GPS module or make the device into a robot.

Because MAKERbuino is open-source and available for download, users can build clones of the MAKERbuino on a breadboard or create compatible boards and modules.

Makerbuino is currently running a Kickstarter campaign to generate funds to mass produce the design kits and bring them to market commercially. To learn more about the project, visit the Kickstarter page.