3-D holograms have long been used in science fiction as a method of furthering a narrative to a story or communicating with someone from great distances. Who can forget the iconic Carrie Fisher as Princess Leia from “Star Wars” echoing “Help me Obi-Wan Kenobi, you’re my only hope.”

These methods in films of creating 3-D holograms are traditionally done using computer graphic effects. Real 3-D holograms are still being studied in labs some relying on virtual reality or augmented reality devices to project optical illusions but must involve the use of glasses or head mounted devices. To create 3-D holograms without special equipment, the wavefront of light must be controlled using wavefront modulators such as spatial light modulators (SLMs) and deformable mirrors (DMs). 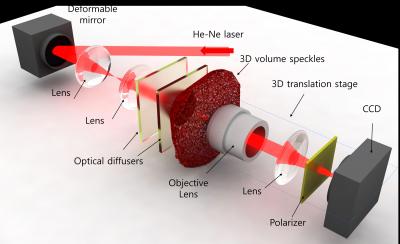 A new type of 3-D holographic display could be used for biomedical imaging, scientific visualization, engineering design and much more. Source: KAIST Researchers at the Korea Advanced Institute of Science and Technology (KAIST) have developed a 3-D holographic display that uses a DM and two successive holographic diffusers to scatter light. By scattering the light in many directions, this allows for a wider viewing angle and a larger image, but results in volume speckle fields. However, random volume of speckle fields cannot be used to display 3-D images.

To fix the problem, KAIST researchers used a wavefront-shaping technique to control the fields. The result was the production of an enhanced 3-D holographic image with a viewing angle of 35 degrees in a volume of 2 centimeters in length and height. This produced a performance that was about 2,600 times stronger than the original image definition generated when they used a DM without a diffuser.

“Scattering light has previously been believed to interfere with the recognition of objects, but we have demonstrated that current 3-D displays can be improved significantly with an increased viewing angle and image size by properly controlling the scattered light,” says YongKeun Park, professor of the physics department at KAIST.

The researchers believe this breakthrough could create a massive potential for 3-D holographic displays to be used in biomedical imaging, scientific visualization, engineering design and much more.