This Company Lets You Turn Yourself into a Hologram

Nicolette Emmino
Holograms—those three-dimensional images formed by the interference of light beams from a laser or another coherent light source—are used more frequently than you would expect. They are found in credit cards, licenses, grocery store scanners, CDs and are even used to bring dead entertainers back to life. Holograms have also made it to the more high-tech end of the consumer electronics space with Microsoft’s HoloLens, the holographic computer that is letting users interact with high‑definition holograms.

Now there is a company looking to bring the fun technology into each and every home. HoloVit was founded last year by Sibel Stanz and Jeff Deleon, a holography systems researcher for nearly 15 years. The two have developed three different kinds of screens that transform ordinary videos into floating holograms. Users can even turn themselves into a holograph with the company’s technology. 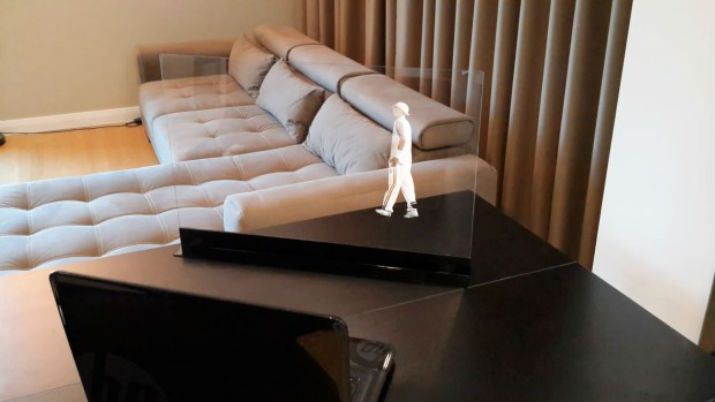 “Every time I used to see a hologram in a sci-fi movie, I wished I could have one at home,” said Stanz, about her original interest in holographic technology. “Then I met Jeff in 2014 right before he came up with his current holography screens. We wanted to make a user-friendly and affordable hologram system so that people could get a taste of holograms without going to big shows and concerts.”

Deleon developed his first holography system in 2006 and two years later came up with a new technique for producing high-quality holograms in brightly lit settings. He is credited with creating an in-home holographic entertainment system “to change the course of the home-entertainment industry.”

Currently there are three different HoloVit screens for users to toy with: a small screen designed for smartphones and tablets, a medium screen for laptops, and a large one for TVs. The screens allow users to view hundreds of online videos as hologram shows. There is even a holographic video game called Hologram Battle that is available on Google Play and Apple App Store.

The system was designed to work with the different devices without a need for a projector or any special equipment. Technically the device itself becomes the projector when it faces the HoloVit screen.

Unfortunately the company is not at liberty to discuss the precise technology involved in making the whole thing come to life, but it is based on the use of mirrors.

“When set at the optimal distance (for best results), images and video come to life, even in brightly lit rooms—using mirror effect,” said Stanz. 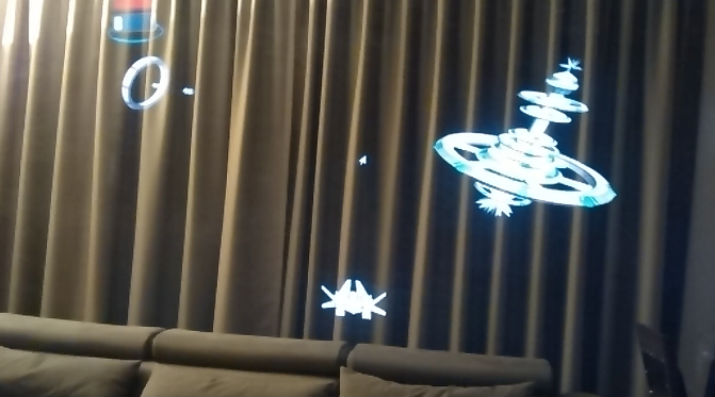 The Hologram Recording Set allows users to record their own holograms. The duo figured out the right materials, ideal screen thickness, and the right angle to make the holograms using the mirror effect. The technology is similar to that of Microsoft's HoloLens, but the HoloVit team says its version is a lot simpler.

The black background material is crafted in such a way that it does not reflect light during video recordings. After placing the stand against a wall, users can set up in front of it and let someone else take a video with their phone or tablet. Once video recording is complete, the phone or tablet can be placed across from the HoloVit screen and when the lights are turned off, users become holograms.

Once holograms are recorded they can also be shared via social media sites.

When using the television-compatible screens, users become privy to an immersive experience with huge holographic images floating around the room without a projector.

Stanz believes the technology is heading in the direction of what Microsoft has been trying to accomplish—having holograms as a user interface.

According to Stanz, the biggest challenge at this time is limited content to use for holographic videos.

“Once we get the funds after the campaign, we will produce more holographic content that can be played as holograms,” said Stanz.

For now, HoloVit is running a second crowdfunding campaign on Indiegogo. Its first successful campaign allowed the team to prove its concept. After shipping the first run of screens to initial backers, the company received positive feedback.

For anyone interested in trying out the technology, you can buy a small screen for less than $80 on the campaign site, with shipping expected next month.