Researchers at the National Institute of Information and Communications Technology (NICT) have developed a protection-type, see-through, holographic 3-D display technology that could change how industrial applications use displays in the near future.

The holographic 3-D display technology combines an optical screen of a digitally designed holographic optical element (DDHOE) with a digital holographic projection technique. The result is a holographic 3-D image that can be viewed on a see-through screen for use in applications such as digital signage, in-car head-up displays, Smart glasses or head-mounted displays.

The company began its hologram project in 2014 and developed a hologram printer for recording a digital- designed wavefront. The printer can print not only 3-D data for 3-D visualization, but also it can fabricate holographic optical elements. This was made possible by advancements in high-speed computing and communication technology that allow for huge amounts of data to be transmitted in order to create a viable 3-D holographic display that has a high degree of freedom of both the display size and the viewing angle. 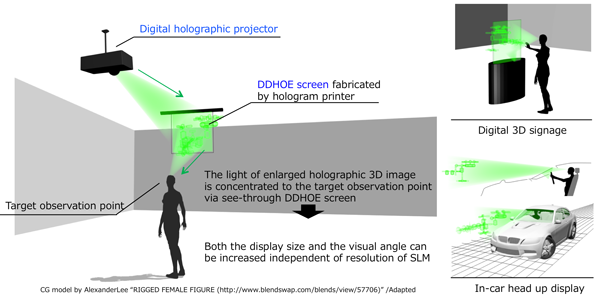 Using a digital holographic projector and a DDHOE screen created on a hologram printer, visual angle and display size can be increased from conventional methods. Source: NICT Then NICT modified its holographic 3-D display system with a projection lens. The function to concentrate the light of a projected holographic 3-D image to the target observation area was calculated as wavefront information—amplitude and phase distribution of the light—considering the projection parameters.

The wavefront was then implemented into a holographic recording film by using a hologram printer. The company says conventional approaches use a concave mirror or a convex lens to increase the visual angle of a holographic 3-D image. In contrast NICT’s new approach allows for a higher degree of display- size freedom and visual angle.

The company says future iterations of its hologram technology will include a full-color display system by upgrading the hologram printer and multiple holographic projections from different incident directions to the DDHOE to extend the observation area.