Hewlett-Packard surprised the electronics industry in 2008 by building the first working memristor – a fundamentally new kind of electronic circuit that can store multiple levels of data in a single cell. Since then, HP has touted memristors as a revolutionary alternative to transistors that is poised to transform computing, and the $77 billion memory chip market, with chips that are fast, durable and energy efficient, and retain data when powered off. 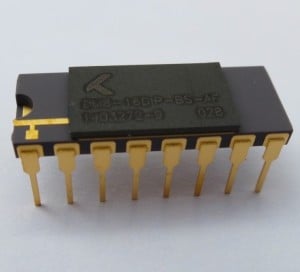 Other companies – including Crossbar, SK Hynix, HRL Laboratories and Rambus – also have been researching memristors, but HP has been the biggest cheerleader for the technology, which could eventually replace other leading semiconductor memory types – including NAND flash and dynamic random-access memory (DRAM).

Yet despite years of effort, memristors are still struggling to leave the starting gate. HP planned to use memristors in an ambitious next-generation computer called “The Machine,” for example. But last year it abruptly dropped memristors from the project’s initial design, because the new chips were not ready in time. “The road from lab to fab is a long and rocky one,” admitted Martin Fink, HP’s chief technology officer, while revealing the company’s plans to use “plain old DRAM” chips instead.

Last October, HP made headlines again by partnering with flash memory maker SanDisk Corp. to jointly develop memristor technology. Since then, however, both companies have been busy with either restructuring (HP) or being acquired (SanDisk), and neither has said much about the memristor program. Both declined interview requests for this article.

Yet while HP’s memristor program struggles to keep its momentum, Knowm, Inc., a small Santa Fe, N.M., company with just five full-time employees, has beaten the industry’s giants to the punch by bringing the industry’s first memristor chips to market.

Last July, Knowm began selling memristors fabricated in partnership with Boise State University. The company is also selling software, services and access to its experimental research data to encourage others to develop their own memristors. Knowm’s chips, priced at $220 each, are clearly intended for experimentation, not actual production.

CEO Alex Nugent, who co-founded Knowm after working for Los Alamos National Laboratory, concedes that these initial memristor chips are expensive and far from ready for commercial use. But they’re a starting point for researchers to learn about the technology. “This is all about just getting them in the hands of hackers, and people that can tinker with them,” he says.”

Nugent contends that memristors should not be viewed simply as memory chip replacements. “In my opinion, non-volatile memory is the least interesting thing about memristors,” he says in a company blog post.

He’s more interested in building memristor processors that, like the human brain, can adapt, learn and even repair themselves. He expects these “synaptic” capabilities to be useful for, among other things, developing better speech recognition, robotic controls and artificial intelligence systems.

“Memristors have been just around the corner for years,” says Alan Niebel, CEO of Web-Feet Research. They have been difficult to commercialize thus far, he notes, but if production and cost challenges can be overcome, they may help to usher in a new type of computing architecture “patterned after the way our brains actually record and process things.”