Sandia National Laboratories’ has proposed a new blade design that could help bring offshore 50-megawatt (MW) wind turbines to the United States and the world.

Researchers from the University of Virginia (including Sandia researchers), University of Illinois, the University of Colorado, the Colorado School of Mines and the National Renewable Energy Laboratory have all teamed up to develop a low-cost offshore 50-MW turbine with a rotor blade more than 650 feet long, two and a half times longer than any existing wind blade. 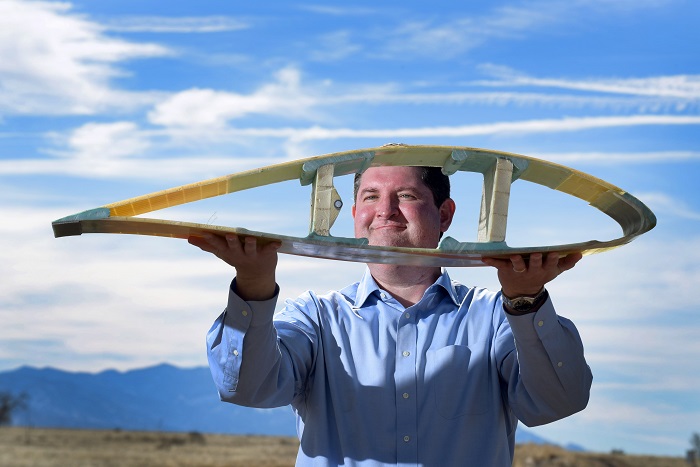 Todd Griffith with a cross-section of a 50-meter blade, part of the pathway to the 200-meter exascale turbines planned under the DOE. (Source: Randy Montoya)

The initial designs are based on a previous 12-MW Sandia system that uses blades that are 328-feet long.

While a 50-MW horizontal wind turbine is well beyond the size of any current design, the team’s studies show that load alignment can dramatically reduce peak stresses and fatigue on the rotor blades, which would reduce costs and allow for the construction of blades big enough for a 50-MW system.

Currently, in the United State, wind turbines produce power in the 1- to 2-MW range, with blades about 165 feet long. Even the largest commercially available turbine is rated at 8 MW with blades only 262 feet long.

“The U.S. has great offshore wind energy potential, but offshore installations are expensive, so larger turbines are needed to capture that energy at an affordable cost,” says Griffith.

The team will have to face a variety of challenges before they can scale up to a 50-MW turbine — more than six times the power output of the largest current turbines. The blades are costly and must be stiff, durable and eliminate the risk of tower strikes in strong gusts.

“Those stiff blades are heavy, and their mass, which is directly related to cost, becomes even more problematic at the extreme scale due to gravity loads and other changes,” says Griffith.

In order to combat some of the costs, Griffith suggests manufacturing the blades in segments, eliminating the need for transportation and assembly of blades as single units

The exascale turbines would be sited downwind, unlike conventional turbines that are configured with the rotor blades upwind of the tower.

The researchers were inspired by the movements of palm trees in heavy storms. The lightweight, trunk manages to bend in the wind while retaining its stiffness. Using the palm-tree approach, the mass required for blade stiffness could be significantly reduced.

The segmented turbine blades could work well in parts of the world that experience often hurricanes, where offshore turbines would need to withstand wind speeds over 200 mph. The blades align themselves to reduce cantilever forces on the blade through a trunnion hinge near the hub that responds to changes in wind speed.

This move toward exascale turbines could help the Department of Energy’s goal of providing 20% of the nation’s energy via wind by 2030.