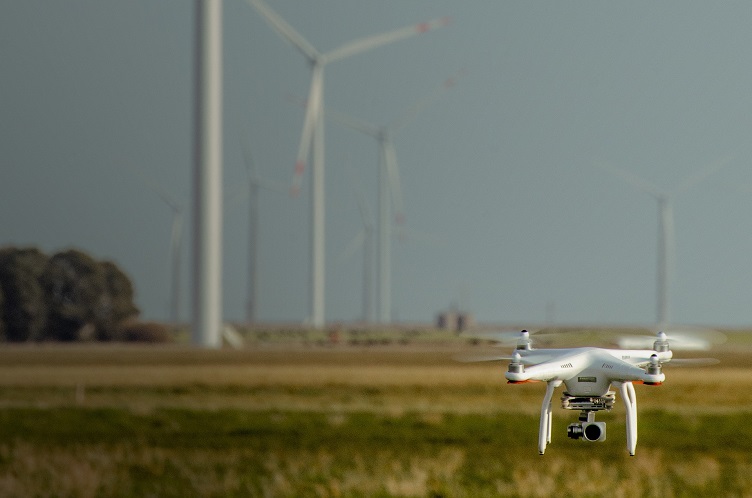 Drones being used at wind farms may be able to reduce the energy spent heating blades during the winter and improve overall green energy usage. Source: Ana Sibler/Pixabay

A new research project is working to use autonomous drones in the winter to see if they can make wind turbines more efficient when icing occurs.

The project from Aarhus University believes that drones are capable of scanning, detecting and reporting icing on the blades of the turbines, a significant problem during the winter, to make the overall wind farm more energy efficient.

The project will use drones equipped with different sensors like RGB cameras, thermal cameras, lidar, ultrasound and more to identify the best combination of technologies and artificial intelligence (AI) algorithms.

The first test will be on offshore wind turbines in January of 2023 after researchers will use calculations and models to find the correct combination of technology that works.

Once colder temperature take hold, the energy produced by wind turbines can be disrupted by ice forming on the blades and can reduce the annual energy production of wind farms by up to 80%.

"It's damn hard to detect ice on turbine blades because ice is transparent,” said Erdal Kayacan, associate professor from the department of electrical and computer engineering at Aarhus University. “In this project, we’re going to try out several different sensor systems built into the drones. We’re also going to develop an AI-controlled algorithm that uses advanced image recognition to see the difference between blades with and without icing.”

These conditions could force wind farms to shut down, costing the wind energy industry billions.

"It’s a serious problem for wind farms,” Kayacan said. “At present, they heat the blades, but they do so indiscriminately: They can’t see exactly where icing is taking place. This project aims to identify precisely which wind turbines have icing and exactly where on the blade that icing is located. Once you’ve done that, you can heat the specific area, and this in turn saves energy consumption and thereby optimizes operations.”

The researchers believe the project can reduce the energy use of unnecessarily heating turbine blades and help keep the renewable energy source more viable for green energy production, especially in colder climates.