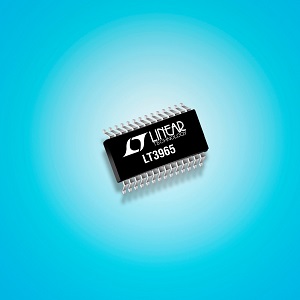 Linear Technology’s LT395 8-Switch Matrix LED Dimmer Using these internal power switches and an integrated I2C serial interface, individual LEDs within the string can be turned on or off, or they can be PWM dimmed to offer unique patterns within the LED matrix.

The I2C serial interface enables digital programming with 256:1 dimming ratios with or without the 11-bit resolution fade transition between the dimming states. Each switch can control and monitor a single LED or a segment of up to 16 V of series-connected LEDs. The LT3965’s 8 V to 60 V input voltage range can accommodate a wide variety of automotive and industrial LED drivers. For larger LED matrix applications, multiple LT3965s (up to 16) can use a common I2C bus.

The LT3965’s eight switches can be connected in parallel and/or in series to bypass current around one or more LEDs in a string. When multiple LT3965s are used, the I2C serial interface enables communication between the master microcontroller and one or more LT3965s configured as slaves. The LT3965 provides an internal clock generator and also supports an external clock source for PWM dimming. Additionally, each switch channel offers both open LED and shorted LED fault reporting and protection.

The LT3965EFE comes in a thermally enhanced 28-lead TSSOP package. An industrial temperature version, the LT3965IFE, is specified for operation from –40°C to 125 °C. Pricing for 1000 pieces starts at $3.95 each and both versions are available from stock.