Lasers and Adaptive LEDS: The Bright Spots of Automotive Lighting

See and be seen. That, in four words is the raison d’être for a vehicle’s headlights. So it should come as little surprise that any new technology that brings the promise of brighter light, greater illumination further down the road, and the ability to help drivers spot pedestrians, animals or other objects as soon as possible would rise quickly to the top of an automobile manufacturer’s “must have” list.

And two technologies have done just that. Adaptive LED and laser headlights, the two next “big things” in automotive lighting, offer all of the qualities mentioned above. Adaptive, or “matrix” LED systems use a grid of individual LEDs that automatically turn on and off based on where the car is headed and the presence of oncoming vehicles detected on the road. Laser headlights provide a focused, long-range beam that can double the reach of normal automotive high beams. Like LEDs, they can also be made to operate in an adaptive manner. 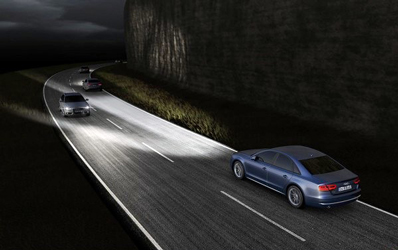 Adaptive matrix LED headlights, such as the Audi MatrixBeam system, mask oncoming cars, reducing glare.These developments mean the era of basic, simple low and high beam headlights may be coming to an end; matrix type LED headlamps allow drivers to essentially have high beams on at all times. By using cameras and sensors, the LEDs can be directed to turn off or dim in response to what is ahead of the vehicle—oncoming traffic—so as not to reduce the visibility of the oncoming driver. The system maps out a grid for the headlight beam area by dividing the LED main beam into a large number of individual segments. A camera (working in some cases with the navigation system and other sensors) looks for other vehicles; if its image recognition algorithm picks up a vehicle that is oncoming or driving ahead, a control unit actuates a mechanism in the headlamp module, causing the headlights to fade out the appropriate area of the illuminating system, masking out other road users detected in the beams' cone of light and avoiding glare into the eyes of the driver of the oncoming vehicle. The main beams are automatically switched on if no other road users with their lights on are detected. The LED illuminators arranged in a matrix can adapt fully electronically to its surroundings in milliseconds.

Some systems take this a step further, using selective lighting to highlight different objects in the road, which can be traffic signs and road markings, warning or hazard signs or objects that can hardly or not at all be seen by the driver, such as deer or dimly lit pedestrians.

At the same time, laser lighting is set to become the follow-on headlamp technology to LEDs. Laser headlights provide 5x the illumination of LEDs and power consumption is said to be half that of LEDs. BMW’s Laserlight system, for example, works by directing the blue beams emitted by three high-performance laser diodes onto a fluorescent phosphorous substance inside the laser light source. This fluorescent substance converts the beams into a high intensity white light, which closely resembles daylight. The newly dispersed light is then projected forward by the headlight unit. An automatic headlight range control system keeps the beam of light at a pre-set level, regardless of driving conditions. Like the matrix LED system, a camera detects vehicles ahead of the car—either in the oncoming lane or those traveling in the same direction as the laser-headlamp vehicle—dimming the portion of the beam shining on the other vehicle.

BMW further says the active headlights can use the car’s GPS coordinates to predictively light curves ahead before the driver turns the wheel. An infrared camera is employed to detect objects (animals, humans) more than 300 feet away, illuminating them to alert the driver. 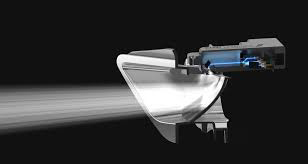 BMW's i8 is the first car to use laser illumination in headlights.hundreds of thousands of tiny elements. This mirror redirects the laser light to a converter, which converts it to white light and projects it onto the road. At low vehicle speeds, the light is distributed to a larger projection area, and a wide angle of the road is illuminated. At high speeds, the aperture angle is smaller, and the intensity and range of the light are increased accordingly. Using input from onboard cameras, the system can steer the light away from the oncoming vehicle so that the high beams do not blind other drivers.

I’m with the government, I’m here to help you

Both adaptive LED and laser-based headlamps are in use in Europe. However, a limiting factor in their further adoption is the delay in the technologies being approved by U.S. regulatory authorities.

In 1968, the U.S. instituted a regulation that required all vehicle headlights to be capable of switching from high to low-beam, a distinction eliminated by self-adjusting adaptive lights. This regulation is still on the books and dictates inclusion of a low-beam headlight. As a result, automakers have yet to deploy Matrix LED headlamps in the U.S., although the SSL technology is widely used elsewhere. Similarly, laser headlamps are outlawed in the U.S. because adding it to most vehicles would exceed the amount of lumens currently allowed by the NHSTA.

There are studies underway that might lead to changes in the NHTSA regulation. For example, the Lighting Research Center (LRC) at Rensselaer Polytechnic Institute (RPI) plans to study the use of adaptive control of LED high beam headlamps. In particular, LRC will examine the Audi MatrixBeam system used in Europe. The study is being sponsored by the Transportation Lighting Alliance (TLA), consisting of such vehicle and lighting manufacturers as Audi, Hella, Osram Sylvania and Philips.