Intersil Corp. has unveiled three radiation tolerant 3.3 V controller area network (CAN) transceivers for satellite communications. The radiation hardened CAN transceivers ISL7202xSEH are fully QML-V qualified and compliant with the ISO11898-2 physical layer standard. According to the company, they are tailored to provide reliable serial data transmission between a CAN controller and CAN bus at speeds up to 1 Mbps. 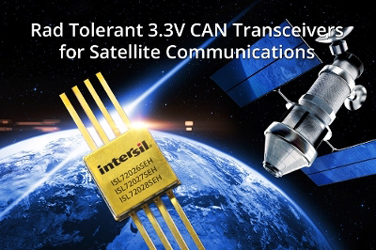 Rad Tolerant 3.3V CAN Transceivers for Satellite CommunicationUp to 120 ISL7202xSEH transceivers can be connected to a single CAN bus to reduce cabling/harness size, weight and power (SWAP) costs. Consequently, the CAN bus transceivers can eliminate the extra cabling and tradeoffs associated with current point-to-point interface solutions, resulting in satellite weight and mass reduction of up to 18%.

Intersil’s CAN transceivers are low-dose rate tested up to 75 krad on a wafer-by-wafer basis, and apply single event transient (SET) mitigation techniques to reduce system level bit error rates, providing predictable performance. To allow the connection of additional unpowered transceivers to the CAN bus, the transceivers are “cold spare” redundant capable.

The ISL72026SEH also includes a loopback test capability that allows node diagnostics and reporting while the system is transmitting data. It also includes a listen mode feature that powers down the driver circuitry while keeping the receiver active to listen for data on the bus, and then activates the driver after data is received. Likewise, the ISL72027SEH offers split termination output using the Vref pin to provide a Vcc/2 output reference. This improves network electromagnetic compatibility and stabilizes the bus voltage, preventing it from drifting to a high common-mode voltage during inactive periods. The ISL72028SEH includes a low-power shutdown mode that switches off the driver and receiver to draw 50 uA for power conservation.

The ISL72026SEH, ISL72027SEH and ISL72028SEH 3.3V CAN transceivers are available in 8-lead ceramic flatpack packages, and are U.S. Department of Commerce export approved under classification 5A991.b. They are also available in die form. To evaluate device features and performances, an evaluation board is available for each rad hard CAN transceiver.