Researchers at MIT and the Qatar Computing Research Institute (QCRI) have developed a system that can automatically convert 2-D video into 3-D video by using graphics-rendering software that appears in popular sports video games.

The researchers’ converted video can be played on any 3-D device such as a 3-D TV, Google Cardbord, or Oculus Rift.

“Any TV these days is capable of 3-D,” says Wojciech Matusik, an associate professor of electrical engineering and computer science at MIT. “There’s just no content. So we see that the production of high-quality content is the main thing that should happen. But sports is very hard. With movies, you have artists who paint the depth map. Here, there is no luxury of hiring 100 artists to do the conversion. This has to happen in real-time.” 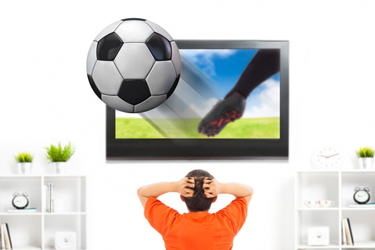 New software can convert 2-D into 3-D video. Credit image: Christine Daniloff/MITThe researchers have been trying to develop general-purpose systems that turn 2-D video into 3-D, but they have not been very successful, producing visual objects that take away from the actual 3D-viewing experience.

Video games that are played now come equipped with detailed 3-D maps of the environment being played in so when the player moves, the game knows how to adjust accordingly, and quickly to create a 2-D version of the 3-D scene that the player is viewing.

The MIT and QCRI researchers worked with this video game technology, but used the system backwards.

They practiced with a realistic Microsoft soccer game, "FIFA13", which was set to play over and over again. Then, they used a Microsoft video-game analysis tool to store screen shots of the action. Each time a screen shot was taken, it also produced the corresponding 3-D map.

They then employed a standard algorithm for gauging the difference between two images, winnowed out most of the screen shots and kept just the ones that best captured the range of possible viewing angles and player configurations that the game presented.

According to the team, the system takes about a third of a second to process a frame of video. They are currently working to reduce the conversion time.