The classic arcade game Ms. Pac-Man is beloved because of its simple, yet challenging premise of the female animated character evading ghost enemies, while collecting items and navigating an obstacle-populated maze.

Call it cheating to win or just a novel approach to beating a very hard game, but researchers at Cornell University have developed an artificial Ms. Pac-Man player that utilizes geometry and dynamic equations to predict the movements of the ghosts to beat a previously held high score. 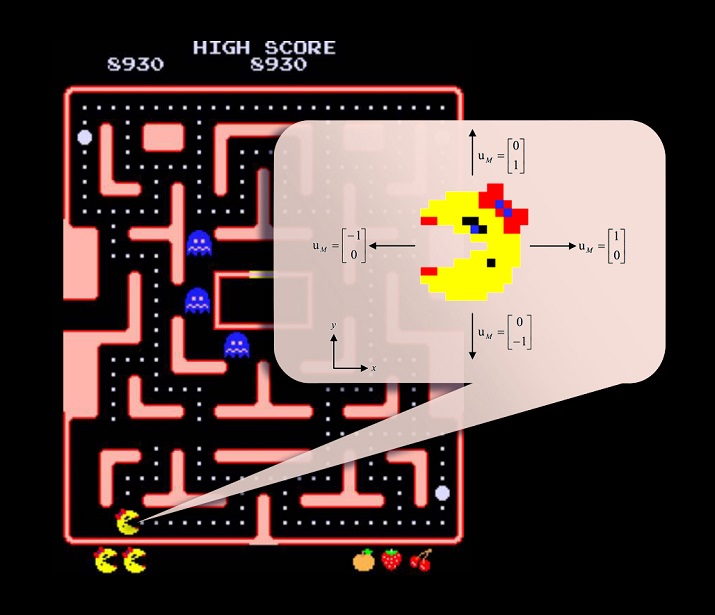 A screen capture of the Ms. Pac-Man game showing vector sign conventions used in the project. Source: Cornell University Engineers and scientists frequently compete to see who can program the best artificial player. The previous record score at the annual Ms. Pac-Man Screen Capture Competition stood at 36,280, but Cornell was about to produce a laboratory score of 43,720. Using a decision-tree approach, the equations were able to predict, with a 94.6 percent accuracy, the path of the ghosts and, as the game progressed, the decision tree was updated in real-time.

“The novelty of our method is in how the decision tree is generated, combining both geometric elements of the maze with information-gathering objectives,” says Silvia Ferrari, professor of mechanical and aerospace engineering at Cornell. The information in this case is the “fruit” Ms. Pac-Man collects for bonus points. Ferrari says this is the first time the game’s components have been mathematically modeled. Previous artificial players were developed with model-free methods.

The goal of the project is to provide a benchmark for developing new computational methods that could later be applied to areas outside of video games, such as surveillance, search-and-rescue and mobile robotics.

While the project is now on hiatus, Ferrari says the team may revisit it in the future to improve the artificial player by adding a component that would allow it to autonomously learn from its mistakes as it plays more games.