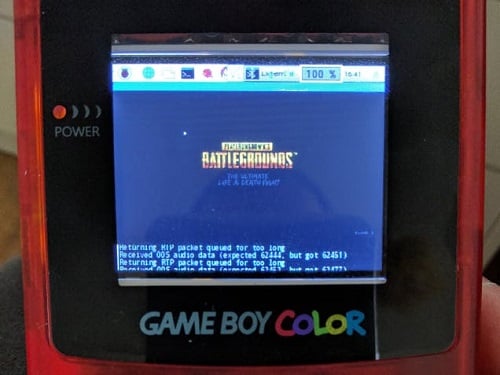 “Player Unknown’s Battlegrounds” is one of the highest selling video games in recent memory, eclipsing 10 million copies sold earlier this month. It took the mega-popular “Minecraft” about two years to get there. “PUBG” did it in six months.

Generally, the game, which pits about 100 players in a battle royal-type fight to the death, is played on a fairly decent performing desktop or laptop PC using a mouse and keyboard.

Now, a maker has created a custom-built Game Boy Color that allowed him to stream the game from his PC to the Nintendo handheld using Moonlight software and a Raspberry Pi Zero W developer board.

However, the Raspberry Pi is insufficient to run “PUBG” so using Moonlight software, Darby streamed the game from a desktop PC.

The result is the ability to play the game, but with extremely limited functions — he couldn’t jump, reload a weapon or drive a car. Still, it is a pretty cool trick and shows just how much you can do with a little time and ingenuity.

Darby explains in detail how he created the project on hackster.io if you want to build your own.