The first example of a device embedded with Ubiquitousware is a head-mounted display. Location badges, vital-sign sensing bands, and other products will be rolled out at the beginning of December. The company has begun field-testing of Ubiquitousware with customers and is working towards deployment of the system across the Fujitsu Group. 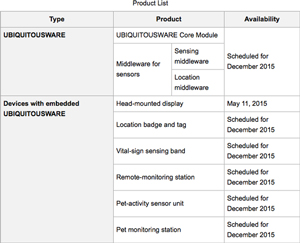 Products being developed by Fujitsu for IoT. Source Fujitsu. variants. Core modules reside in "leaf nodes" such as consumer equipment and work with sensors, microcontrollers and wireless communications to analyze sensor data close to the point of collection. The core module software can work with sensors commonly found in many products—such accelerometers, gyroscopes, barometers and microphones found in smartphones. These core modules work in a tandem with the second variant of Ubiquitousware, middleware that analyzes data in the cloud.

Sensed data is analyzed using what Fujitsu calls a human-centric engine that converts the data into information that can be acted upon, such as fall detection or body posture detection. Ubiquitousware will be available as a package of software modules that can be installed in existing devices and systems, Fujitsu says in a statement.

Three trials of the technology are getting underway. The first is with farmers in Japan, the second is patient location and tracking in the South Ostrobothnia hospital district in Finland, and a third trial will deal with employees from Fujitsu Network Solutions Ltd.