The EPC2035 and EPC2036 have breakdown voltages of 60V and 100V, respectively, and offer maximum rated on-resistance (Rds(on)) of 45 milliohms and 65 milliohms, respectively. Both are designed to compete on price with silicon equivalents while providing superior performance.

Efficient Power Conversion Corp. (EPC) was co-founded by Alex Lidow and two other engineers in November 2007. Lidow, who has served as CEO 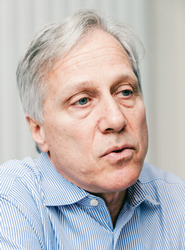 Alex Lidow, CEO and co-founder of EPC. Source: EPC.since then, was a co-inventor of the silicon power MOSFET in the 1970s and, in addition to holding positions in R&D and manufacturing, was the CEO of power transistor vendor International Rectifier Corp. for 12 years.

Since its formation, EPC has been driven by the idea that GaN would be the inevitable successor to silicon because of its inherent performance advantages over silicon; higher performance, less power consumption, lower cost, higher electron mobility and lower temperature.

While GaN and silicon carbide's technical advantages over silicon are well-known, EPC claims that, with its latest introduction, the last barrier to widespread adoption of GaN transistors as silicon MOSFET replacements has fallen—that barrier being price.

Comparison of GaN-on-Si and silicon MOSFETs at 60V and 100V breakdown voltage ratings. Source: EPC EPC has provided in a statement the comparison of silicon power MOSFET to the new GaN with the same maximum breakdown voltage (VDS(Max)) and comparable maximum (Rds(on)). Also included are indicators of switching speed (lower values are faster) and capacitances. Device area is also shown for comparison and it can be seen that the EPC2035 and EPC2036 are one-fortieth the area of their equivalent MOSFET components.

The small areas of the parts—even with lateral transistor structures—allow EPC to get more transistors per wafer. EPC is fabless and has used Episil Inc. (Hsinchu, Taiwan) as a foundry supplier working on 150mm-diameter wafers. GaN is grown on silicon wafers and processed using standard CMOS equipment leveraging the infrastructure that exists.

The types of applications these parts are good for include high-speed dc-dc conversion, wireless power transfer, Class-D audio and LiDAR and other pulsed power applications. 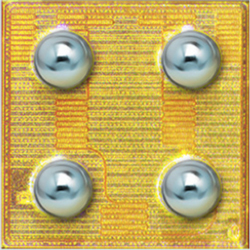 Part of Lidow and EPC's vision is that GaN and SiC will eventually take a significant part of the multibillion dollar market for power devices.

IHS projects that worldwide revenue from sales of SiC and GaN power semiconductors will rise to $2.5 billion in 2023, up from just $150 million in 2013. That is according to the “The World Market for SiC & GaN Power Semiconductors - 2014 Edition."

Richard Eden, senior analyst with IHS, says "The report estimates that GaN power device and power module revenues will achieve $820 million in 2023. GaN transistor sales were predicted to pass the $100 million mark in 2018, but this assumed that average prices of GaN devices would not match those of equivalent silicon devices until 2019. Once price-parity with silicon was achieved, it would cause the GaN power market to triple from 2018 to 2023."

Eden adds, "The news that EPC's latest product introductions, the 60V EPC2035 and 100V EPC2036, are comparable in price to silicon MOSFETs and have superior performance is therefore significant. However, there are some reasons why we should not get too carried away just yet. Firstly, EPC is focussing on comparatively low voltage devices. The market for MOSFETs of up to 100V is about 60% of the total market. But it is growing slower than the high voltage, greater than 400V MOSFET market. The industry is crying out for a good, cost-effective 600V GaN transistor. Several companies are starting to offer devices such as Transphorm, GaN Systems, Panasonic, Infineon, but they are still expensive compared to silicon equivalents."

The main barrier preventing greater use of GaN transistors has been their high cost. This breakthrough should encourage more electronic system manufacturers to initiate testing of GaN devices causing increased adoption of the products, Eden concludes.