This means that a device can start charging as soon as it enters a room that is within the wavelength of the IR light charging hub, according to Wi-Charge (Rehovot, Israel). The company claims that the technology will deliver up to 10 watts (W) of power to multiple devices over distances of more than 30 feet, giving smart home and mobile devices electrical power to recharge their batteries.

"With the coming flood of smart home and mobile devices, ample and pervasive power will be necessary,” Vaisleib said. “Wi-Charge offers a complete, safe and easy to implement solution to this requirement." 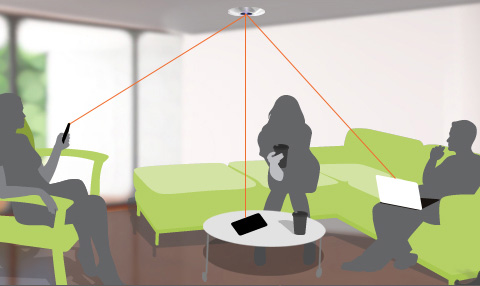 Wireless charging for devices. Source: Wi-ChargeThis new technology consists of a receiver with a high-efficiency photovoltaic (PV) cell and a transmitter with an infrared light emitting diode (IR LED) that users can install by plugging it into a regular electrical socket. Both are backed with retro-reflective mirrors that reflect light or in this case, send the IR energy back to its source. This enables the transmitter and receiver to form a collimated beam of resonating IR light. This self-alignment system allows wireless charging from almost anywhere within a room without aiming or tracking the device and no user action is required to initiate charging. The transmitter only delivers power to receivers it has found. If the beam is obstructed, the resonator ceases.

Laser beams have been used to power remote devices such as unmanned aerial vehicles, but this approach is not suitable for consumer electronics, partly because the beam must be aimed precisely at the remote receiver, driving up complexity and cost.

Wi-Charge claims its IR alternative is long-range, self-aligning, safe and does not radiate significant radio frequency (RF) power into the room, unlike magnetic proximity charging.

Wi-Charge said it is in discussions with original equipment manufacturers (OEM) partners to integrate the technology into a variety of consumer electronics. It expects its first products to be on the market within 12 to 18 months. This will likely begin with after-market products that can be connected to mobile phones or tablet computers, but the company believes the technology will eventually be included in devices. A mobile phone product in the works will consist of a user-installed power transmitter and a matching receiver such as a phone case sleeve.