The global market for smart grid sensors is set for major expansion in the coming years, forecast to increase 10-fold in the next decade thanks to large contracts in North America and rising adoption in other regions, according to new research from IHS Inc.

Smart grid sensors monitor in real-time by offering improved utility operations and performance to the grid.

In 2014, the smart grid market in the U.S. reached $30 million. IHS estimates that this market will grow by an average of 36 percent from 2015 to 2021. The smart grid sensor market accounted for less than 20 percent of total sensor sales in 2014, according to IHS. But by 2021, smart grid sensors are expected to account for 75 percent of total sensor sales, with the market expected to pass the $100 million mark in 2017.

"A growth of this magnitude shows that smart grid sensors will become widely accepted in the near future and while sensors are not becoming business as usual for most smaller utilities, larger utilities companies will incorporate sensors, as part of their regular purchasing decisions," said Fizza Arshad, market analyst at IHS, in a statement. 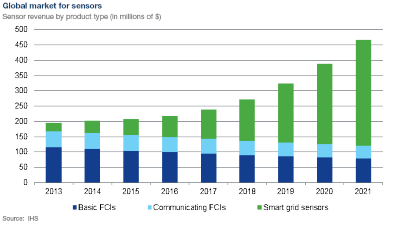 By 2021, smart grid sensors will account for 75 percent of the total sales revenues for sensors, according to IHS.Arshad said many factors will contribute to the growth of smart grid sensors in the next decade. One of the strongest influences was the American Recovery and Reinvestment Act (ARRA) of 2009, Arshad said.

According to Arshad, the smart grid movement that resulted from the ARRA spurred interest from telecommunications providers in critical infrastructure, such as the electric grid. As a result, contracts for smart grid sensors in the U.S. are going up to one thousand or more units, demonstrating greater acceptance of the technology, Arshad said.

While North America is the central market for smart grids currently, Europe, Latin America and other regions are forecast to become high growth markets in the future. Latin America, in particular, has utility vendors spending their time and resources on pilot programs to aid in fault location and theft prevention. Ashad said Latin America is "an untapped market with a lot of potential to grow" because the governments in the region are adopting new policies to encourage investment in smart grids.