LoRa (short for long range) and the LoRa Alliance have recently emerged in the suddenly crowded IoT interface space. The LoRa interface puts network ownership in the hands of the operator, enabling them to facilitate LPWAN offerings for the development of IoT, smart cities, machine-to-machine and industrial communications applications.

At stake is the opportunity to control more than 80 billion Internet-connected devices that are projected to be in use by 2024, up from less than 20 billion in 2014, according to IHS Technology. The majority of these future 80 billion connections will be employed to monitor and control systems, machines and objects such as lights, thermostats, window locks and automotive electronics. 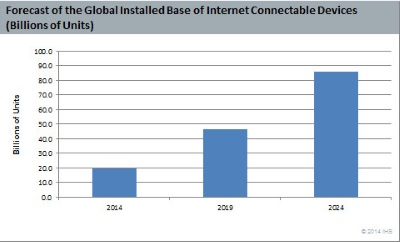 For La Poste, the use of a LoRaWAN-based network would allow the postal company to develop new services while leveraging its brand and increase customer interaction. For NKE Electronics, which is manufacturing industrial and smart building sensors, a wireless LoRa interface would help the company in its development of temperature, humidity monitoring and energy harvesting sensor products. Meanwhile, Swisscom is planning to increase its LPWAN opportunities after seeing market demand and opportunities increasing in this space.

In the past few months, LoRa has been heating up with a number of announcements coming from a variety of companies involved in the emerging standard.

At Mobile World Congress 2015, the LoRa Alliance was officially launched to compete against the IEEE 802.11ah standards body and the well-funded Sigfox interface platform. Coinciding with the alliance kick-off, Microchip unveiled its first LoRa wireless module in a planned series of devices designed to enable long-range wireless interface for IoT and M2M.

In January, Semtech grabbed up Cisco-back EnVerv in order to expand its smart grid technology to further enable its LoRa devices. Also in January, Cisco and IBM joined in support of LoRa for next-generation deployment of the interface for future networks.