Chinese Tier 1 photovoltaic (PV) suppliers are seeing a boom in demand and have sold out of product until the second quarter of 2015. As a result, a shortage in solar modules is expected on the global market in the first quarter of 2015, according to the latest analysis from IHS Technology.

In the fourth quarter of 2014, China’s PV module makers had a surge in demand growing its market share to 45 percent of the global sector, up from 34 percent in the third quarter of last year, IHS said. Moving into the first quarter of 2015, IHS believes the combined market share for Chinese module suppliers will remain at this level, as shown in Figure 1. 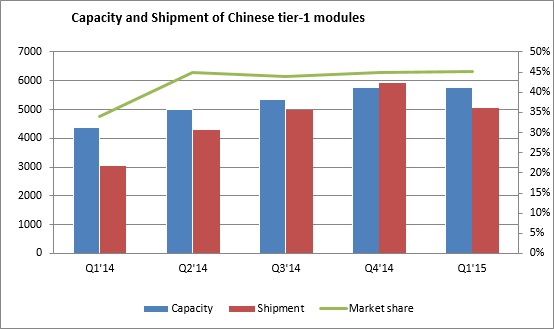 Chinese Tier 1 module suppliers gained market share in the fourth quarter and are expected to keep those gains in the first quarter of this year, IHS said.

Jessica Lin, analyst for solar at IHS, said in a statement that after the surge in demand in the fourth quarter, Chinese Tier 1 module suppliers “decreased their inventory significantly” and with the Chinese New Year taking place in the first quarter of 2015, “companies won’t run their capacity in full production” so a shortage is expected as most suppliers have already sold out for the first quarter.

IHS said that the Tier 1 suppliers in China will benefit from demand surges in Japan, the U.K, South America and Central America. Furthermore, as some solar projects in China have been postponed and won’t be complete until the first quarter of 2015, the domestic market is also going to provide substantial opportunities for Chinese suppliers.

IHS forecasts the global solar PV installations in 2015 will reach 52.8 GW, with most of the installations taking place in the second half of the year. With Chinese Tier 1 suppliers building up inventory in the second quarter, these suppliers should be able to meet the demand for the second half of the year. IHS believes consolidation of the module market – which took place heavily in the fourth quarter – will continue into the first half of 2015 as a way for Chinese Tier 1 supplier to meet demand.

An example of this expansion can be seen by JA Solar announcing it will expand module capacity 20 percent in 2015 and Trina Solar adding 1 GW of module capacity during the year. Other Tier 1 suppliers are also expected to expand.

Solar Boom in the UK Expected in 2015