The European Union funded project dubbed "Euroserver" ostensibly targets data center power efficiency as other energy-saving measures such as cooling hit a brick wall. The "green computing" initiative also seeks to take a new approach to datacenter scaling while attempting to rein in IT equipment density and energy consumption.

The Euroserver project that includes such European electronics heavyweights as ARM Ltd. and STMicroelectronics is pursuing a next-generation server on a chip that could present a viable alternative to Intel's x86 architecture and the chip giant's low-power Atom processor for micro-servers. By shrinking the size of future server components, the arguments goes, datacenter energy consumption can be drastically reduced, making ARM-based servers more attractive to power-conscious datacenter operators.

"With the growth of data centers being driven by the Internet of Things, there is absolutely a demand for low cost, low power, small footprint and customizable servers to meet the various workloads," said Craig Stice, senior principle analyst for compute electronics at IHS Technology.

Along with ARM Cortex processors, the consortium is also leveraging STMicroelectronics' fully depleted silicon-on-insulator (FD-SOI) process technology and 3-D chip integration. The Euroserver design will use the layout technique to place "chiplets" on a silicon interposer that has been modified to provide on-chip interconnects and SoC interfaces. The approach is said to reduce distances between cores as well as between cores and memory "and greatly reduces the cost of application specialization," the partners claim.

How the Euroserver design works for on-chip and system-on-chip interfaces.

Other key features of the Euroserver architecture include decreasing memory and I/O power dissipation along with resource "mutualization" and data sharing as a way to more efficiently distribute memory resources among cores. "The processor, the memory hierarchy, I/O, the system interconnects and the systems’ software all require fundamental changes to match the application’s performance in less space and with drastically lower energy costs," the consortium asserts.

"We've hit a brick wall by simply throwing more cores in a box," said Julian Chesterfield, director of emerging technologies at OnApp. "That doesn't scale," and future data center operations are largely about the ability to scale.

The initial phase of the Euroserver initiative is indeed "all about scaling," agrees project coordinator Yves Durand of CEA-LETI at the University of Grenoble, France. The first step will be scaling ARM processors to save power, then pulling together a prototype system beginning in 2015 to demonstration that the Euroserver concept can be used to scale data center operations while reducing power consumption.

A technical paper describing the Euroserver project coauthored by Durand and other consortium members, including John Goodacre, ARM's director of technology and systems, notes that the "micro-server system architecture is based on a large number of cores, each of them being much simpler than a conventional x86 processor."

Durand acknowledges the ARM-based approach is targeting the dominant x86 server market, but declined to elaborate. He did say Euroserver expects to establish microserver benchmarks and perhaps target memory standards.

Observers note, however, that the Euroserver consortium lacks a server manufacturer as a member.

Among the target audience for ARM-based servers appears to be Hewlett-Packard, whose Moonshot platform uses 64-bit ARM cores in its ProLiant servers for functions like web caching. HP touts the Moonshot server as using 65 percent less power at a time when data center operators coping with an onslaught of Big Data are looking for new ways to cut energy consumption while handling more and varied workloads.

Durant said Euroserver hopes to demonstrate to HP and other potential server vendors that it energy-saving approach is a viable alternative to x86.

The market for micro-servers looks to be booming. Euroserver estimates there are currently 500,000 datacenters around the world. That number could actually decline as more datacenters are consolidated and collocated. However, data volumes are expected to soar, with estimates reaching as high as an unfathomable 40 zettabyes (1 zettabyte equals 1 trillion gigabytes) by 2020.

Other server chips based on 64-bit ARM chips are also starting to hit the market. For example, Advanced Micro Devices announced its first server platform based on ARM Cortex-A57 cores in July 2014. AMD's Opteron processor is being targeted at software and hardware developers along with "early adopters in large data centers," AMD said, adding that its developer kit seeks to "reimagine the data center" based on ARM's business model.

Stice of IHS notes that the ARM server market has been emerging over the last few years. With the introduction of ARMv8-A 64-bit processors, "the industry is at a point of finally being able to build working systems," Stice says. "However the entire ecosystem for ARM technology, including hardware and software, in the server industry is still in early stages of development."

He adds: "I don’t expect ARM servers to grow into a dominating market share versus x86, but if the ARM ecosystem and consortiums like Euroserver can provide the value and proof to dramatically improve [total cost of ownership], then there is definitely opportunity."

Such a ground-up approach makes sense as efforts to improve datacenter metrics like power usage effectiveness, or PUE, are stalling. A datacenter survey released in June by the Uptime Institute found that investments aimed at improving PUE are hitting a wall.

Still, the Euroserver project in many respects appears to be a vehicle for getting more 64-bit ARM chips into data centers. The U.K. chip intellectual property company has been focusing on low-power designs that can scale to provide processing power when needed.

The Euroserver architecture consisting of multiple "chiplets" placed on a silicon interposer would be managed by system software that oversees server resources while isolating workloads when they use shared server resources like I/O, storage, memory and interconnects. The next-generation system software would consist of multiple "coherence islands" that include a hypervisor used to monitor virtual machines and an OS. Virtual machines would sit on top of the OS/hypervisor. 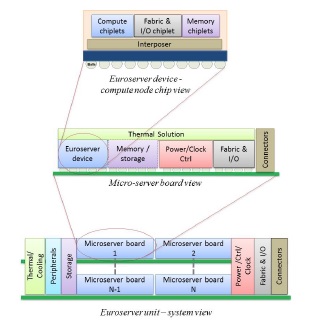 Euroserver system, chip and board overview.

Along with datacenter and cloud computing, Euroserver said its approach could also find applications in telecommunications networks and embedded systems. Among the "typical workloads" for the proposed micro-server are web-server hosting, distributed databases like Hadoop, relational databases such as MySQL and network communications.

Durant said he expects the first Euroserver "chiplets" to be ready in early 2015 with the first benchmarks and a prototype system available later in the year.

The three-year Euroserver project was launched in September 2013 with a total budget of 12.9 million euros (about $16 million). The European Commission kicked in two-thirds of the consortium's funding.

Hardware Emulation: A Revolution in the Making