A research team from the University of Washington has successfully embedded a light emitting diode (LED) in a contact lens and powered it up wirelessly, bringing closer the possibility of an eye-up display.

The research team has reported on demonstrating the safety of a prototype in the eye of a rabbit. At present it is just a single pixel display but the researchers say such contact lens could be worn by humans and that eventually a multipixel display could present short emails and other messages in front of the wearer's eye or eyes. 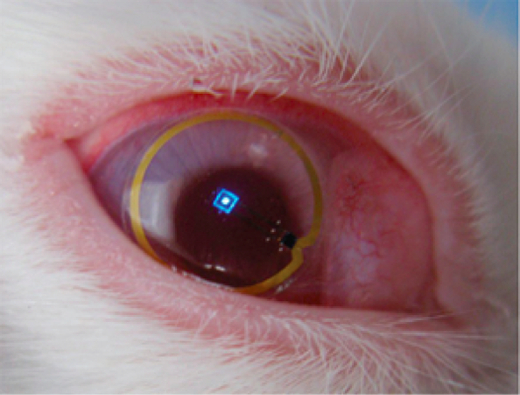 Single-pixel display embedded in contact lens on the eye of a rabbit. Source: University of Washington.

The display consists of an antenna, a 500-micron by 500-micron silicon power harvesting and radio integrated circuit, metal interconnects, insulation layers and a 750-micron by 750-micron transparent sapphire chip containing a light emitting diode with peak emission at a wavelength of 475nm, all integrated onto a contact lens.

The display was powered up wirelessly at distances up to a meter and tested on live anesthetized rabbits with no observed adverse effect.

The latest move, published Nov. 22 in the Journal of Micromechanics and Microengineering, is part of a seven-year research effort by Parviz and others

Otis called this successful wireless transmission to a lens “an extremely exciting project … that presents huge opportunities for health-care platforms.” The team is working on a way to continuously monitor a glucose levels in diabetic patients using contact lenses.

Journal of Micromechanics and Microengineering article

IHS medical and healthcare IT research