If Google Glass Is a Hit, Can Contacts Be Far Behind?

Whether for reasons of convenience or appearance, many consumers have replaced their eyeglasses with contacts, and researchers are wagering the public is likely to want to do something similar with portable device technology.

Even before Google Glass—the wearable computer with the optical head-mounted display—becomes available by year-end, several groups of researchers are already working on active contact lens devices they say will eventually combine functionality with comfort and style.

For example, at Ghent University in Belgium, computer researchers have built an LCD screen into a contact lens using conductive polymers and molding them into a very thin, spherically curved substrate with active layers.

At the moment, all the lens does is flash a dollar sign, but Ghent PhD student Jelle De Smet and his team foresee the lens could function as an HUD (head-up display) that could superimpose an image onto the user's normal field of view. This kind of screen-on-the-eye technology could displace smartphone displays as the dominant way people access the Internet visually and connect to each other, according to De Smet.

He describes the lens as providing information in ways similar to how Google Glass operates, but without the user having to wear glasses.

"The functionality we foresee could comprise reading e-mail and text messages, turn-by-turn directions, information about your surroundings, or a work situation where your hands need to be freed up, such as patient information for surgeons or a diagram for astronauts doing repairs on a satellite," De Smet said. 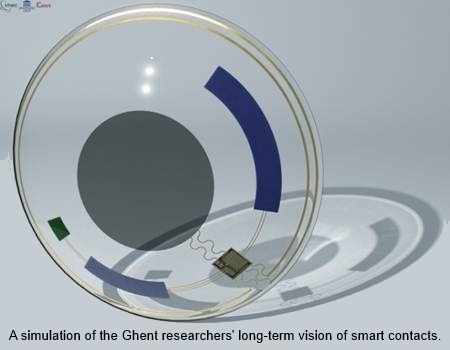 In just the past few months, the team has increased the number of pixels in the display to nine, and upgraded the interconnection technology that drives the lens. But the biggest hurdle is the fact that pixels located on a contact lens can't be seen clearly because the eye can't focus on something located so close to it. While one approach had been to place an integrated microlens in front of every pixel, it was determined that only a small area of pixels— perhaps 15 x 15—could be obtained by using this method. A different approach will be needed for complex images.

This means it could likely be another 10 years before a prototype with an acceptable number of pixels is available, said De Smet.

[A video prepared by the Ghent group shows how a consumer would charge up a smart contact lens.]

Meanwhile, another research team has been working on creating a soft, very thin, transparent metallic material that would allow wearable as well as implantable electronics to be inserted into the eye or elsewhere in the body.

In their 2012 paper, two researchers—SungWoo Nam, an assistant professor in the Department of Mechanical Science and Engineering at the University of Illinois Urbana-Champaign, and Jang-Ung Park, an assistant professor at Korea's Ulsan National Institute of Science and Technology—demonstrated a hybrid conducting material composed of nanowires and graphene, and its integration onto a soft contact lens.

"The transparent, flexible, ultrathin material would house the sandwich layers of graphene and dispersed nanowires, and ensure that the wires wouldn't detach from the contact lens, thereby losing connectivity," said Nam. 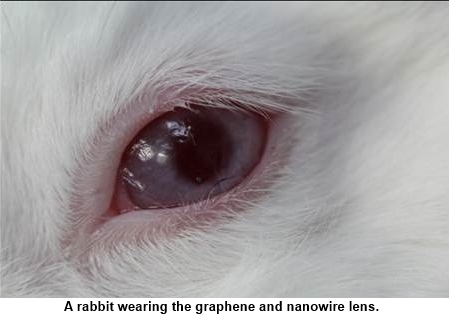 In his more recent proposal, presented last month at the IEEE EMBC Conference, Nam discusses how a graphene material would be flexible for implantable biosensors and stimulators so as not to cause inflammation, bleeding, or other harmful side effects, and would allow sensors or other electronic devices to be worn comfortably on or inside the body over an extended period of time.

Now that a proof of concept for the material exists, the next step for Nam and Park is to focus on integrating the biosensors and display. The U.S. Air Force is helping fund Nam's laboratory while Samsung is partially funding Park's work.

"While the Ghent University group is putting active elements into contact lenses to allow for pixelated on/off transmission—functioning perhaps as an artificial iris —we are using passive optics to magnify the view of the world," said Eric Tremblay, a scientist at EPFL (École Polytechnique Fédérale de Lausanne). "We use active liquid crystal glasses to switch the view through the contact lens."

The team has built several prototypes and has done some preliminary human trials, with another expected around year-end. 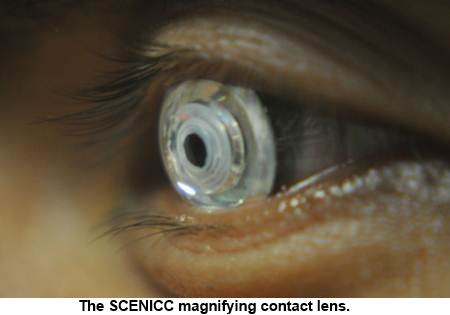 "While there is a great deal of work still ahead, we see a clear path to a comfortable, low-vision aid powered by a contact lens, which will help a significant number of people who have impaired vision," said Joseph Ford, a professor of electrical engineering at the University of California San Diego, the principal investigator on the project.

According to Shane Walker, associate director for Consumer and Digital Health Research at IHS, "the work being done surrounding contact lenses is significant as it represents the wave of wearable tech we expect to see beyond our typical five-year forecast horizon.
"Within the next five years, I expect optimized displays and energy harvesting to allow for more functionality on any given device by extending battery life, including some of the features we currently find on smart phones," he said. "This will be an interim step toward enabling wearable tech such as these contact lenses."