When it comes to watching 3D movies on smart devices, people often suffer from headaches and nausea as a result of the display technology.

Researchers from Sun Yan-Sen University in China have developed a new display with 3D visual effects that could relieve viewer discomfort. The device is based on a "super multi-view technique" which decreases the required number of microdisplays, making it as compact as possible.

"There are many causes for 3D-viewing discomfort, but the most substantial one is the vergence-accomodation conflict," said Lilin Liu, associate professor of the State Key Lab of Optoelectronics Materials and Technology, Sun Yat-Sen University, China. 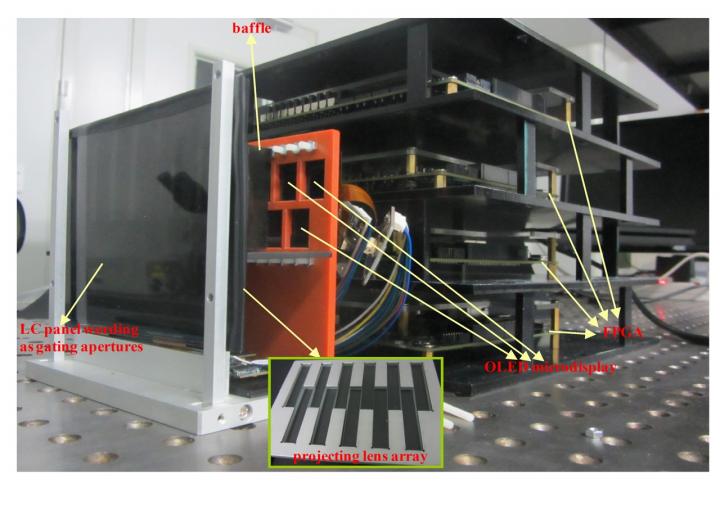 According to Liu, vergence-accomodation conflict is a mismatch between the point at which the eyes converge on an image and the distance to which they focus when viewing 3D images.

The human eyes are separated by about six centimeters, so when looking at an image, they see two different images. The brain directs both eyes to the same object and the distance at which the eyes' sight lines cross is called "vergence distance." It then adjusts the focus of the lens within each eye to make the image sharp and clear on the retina. The distance to which the eye is focused is called “the accommodative distance.” Failure to converge leads to double images, while mis-accommodation results in blurry images.

When looking at an ordinary image, vergence and accommodation are correlated with each other and adjust simultaneously, so they’re always the same, which is why people view objects clearly and comfortably.

Current 3D displays try to mimic natural viewing by creating images with varying binocular difference to simulate vergence changes in the natural 3D landscape. However, the accommodative distance remains unchanged at the display distance, resulting in the discomfort.

"Conventional 3D displays usually deliver some views of the displayed spatial spot to a single eye pupil. That is why accommodative distance remains fixed on the display screen and cannot adjust simultaneously as vergence distance does, causing vergence-accomodation conflict," said Liu.

To solve this problem, the team projected numerous 2D perspective views to viewpoints with intervals smaller than the pupil diameter of the eye so that the device could deliver two different views to a single pupil.

"Our proposed scheme overcomes vergence-accomodation conflict by delivering more than two views to a single eye pupil, making the eyes focus on the displayed image naturally. Also, the prototype in our study is 65-millimeter-thin, and the system could become thinner with improvement in structural elements, which provides a demo for comfortable 3D wearable electronics or portable displays," said Dongdong Teng, co- author of the paper.

What they came up with was a prototype system that consists of 11 elementary projecting units. Each projecting unit is constructed by an organic light-emitting diode (OLED) microdisplay, a rectangular projecting lens, two vertical baffles and a group of gating apertures (liquid crystal panel) attached to the projecting lens.

"Creating a dense arrangement of viewpoints on the display screen is the key to comfortable 3D effect," said Liu.

The team tested the system on eight different subjects who observed a 3D image of an apple. The subjects reported no discomfort or headaches.

The structure is thin, too, around 65 millimeters, which makes future applications in mobile devices and wearables possible, but the team is going to focus on making the device even thinner in the future.

Liu said adjustments to the device could make it even thinner, which is a focus of their future work.