Reinhard Ploss, CEO of Infineon Technologies AG, has effectively rejected the European Commission's "Airbus of chips" plan to try and reverse the downward trend in European manufacturing semiconductor as a proportion of global supply. This is despite the fact that Ploss is a member of the is Electronics Leaders Group of CEOs, chartered by the European Commission to come up with a strategic plan to double Europe's percentage of world chip manufacturing from about 10 percent to 20 percent by 2020.

Ploss was interviewed by Maria Marced, president of TSMC Europe BV, on stage at the Global Semiconductor Alliance European Executive Forum, held in Munich, Germany May 13 and 14. This was a few days after Ploss had told Infineon investors that the company was reducing its long-term target for capital spending as a proportion of sales from 15 percent to 13 percent.

Marced asked: "You are part of the ELG. Neelie [Kroes, European Commission vice president] has focused on the manufacturing position. You seem to have a different position. Are you the only one?" 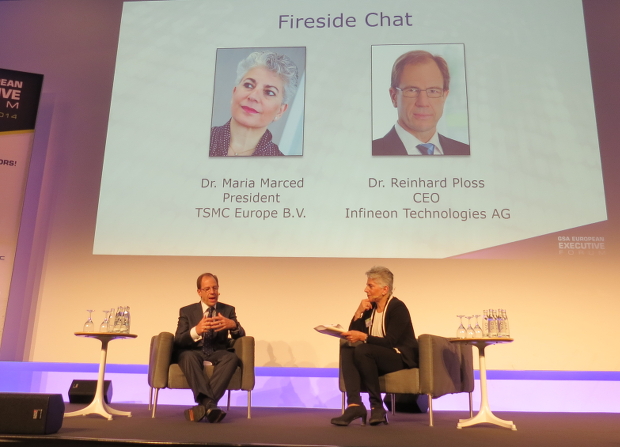 Ploss responded that he could not speak for other companies but said that he felt that the major semiconductor companies in Europe were all striving to embrace system-level thinking in a variety of applications. "Before you think about manufacturing you think about the needs of the customer. You have to think about how you create value, about system integration."

Referencing the goal of increasing European chip manufacturing Ploss added: "I honor the idea but think first of competitive advantage. Analog power we do manufacture. CMOS; a lot of foundries can do this better than we can."

Speaking to Electronics 360 on the side of the meeting Ploss made the point that Infineon was able to reduce its capital intensity because it was moving power IC manufacturing on to 300mm wafers at its wafer fab in Dresden and this provided a commercial advantage. When asked if his value-over-manufacturing stance had been explained to the European Commission, Ploss said it had. He added that there would be no point in spending European Commission funds on a wafer fab or foundry without a clear idea of what circuits could be manufactured there more cost effectively than elsewhere.

On-stage in front of more than 300 executives from the electronics industry Marced had also asked about the interplay of business and technology in Ploss's career and as CEO of Infineon.

Ploss agreed that technology and business and closely linked and that mastering complexity from IC manufacturing through to software, system and service issues was now necessary for success. He said he also saw how companies handle the disruption of the ending of Moore's Law as a key. "Moore's Law will move on but how will it move on? These days you need a very wide understanding of how value can be generated." 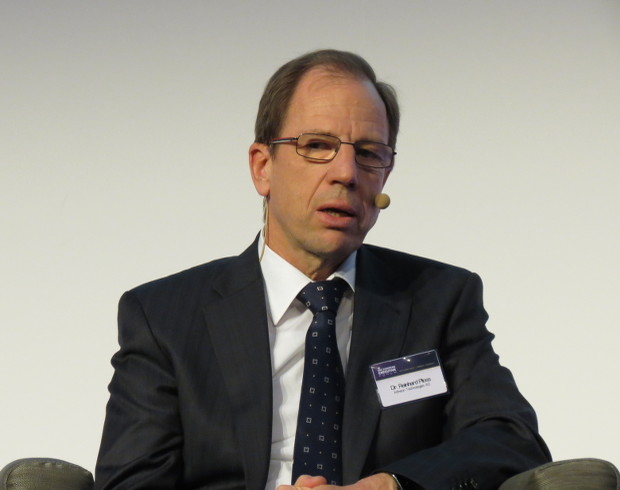 Ploss: How will discontinuity in Moore's Law change technology-based business?

Ploss said at times like these you have to look not just at the competitors within the game but how you can change the game. "I would not say you have to grab more production. Europe has to look at the system-level in automotive, industrial, aerospace. Then we can design the right systems. The European Commission has changed. It is not saying production only but gaining overall share is the important thing."

"Automotive, energy transmission aging population; these are the challenges. I think we can provide benefits throughout the value chain down to the semiconductor. Let us think about the need and the pull and then meet that," Ploss said.

Marced asked Ploss if he was looking to developments such as wearables and the Internet of Things to drive future chip sales. "Is IoT the next big thing. I am not so sure. The semiconductor industry always looks for the next big thing." He said the end to the constantly decreasing cost-performance ratio due to the end of Moore's law could be more significant. "The way of competition will change and the level at which you earn the value. Infineon has to move into system-level considerations."

Ploss said the failure of extreme ultraviolet (EUV) lithography to arrive would not only make monolithic integration at the leading-edge more expensive to develop but would also increase the emphasis on other forms of interconnect such as multi-die packaging. "When you cannot integrate on one chip you integrate in one package. But who is responsible for the co-design, for the simulation across multiple die?"

Merced then moved the conversation on to the automotive sector, which is important to the Munich region and to Infineon. Are electric cars a disruption to the industry she asked?

Ploss said that ten and more years ago Infineon had been very active in preparing for electric vehicles but had been ahead of the market. "Now Tesla has somehow changed the landscape. But can BMW or Mercedes be a Tesla?" he asked. Similarly Ploss said the audience should not get over excited about autonomous driving which he thought was "very far out" in time.

However, it was important to remain vigilant. In the communications space Huawei had come from nowhere to being a leading global player in a short space of time. The same could happen in automotive, Ploss said. "It's the intersection of technology deceleration and agile competition." That said Ploss emphasized that Infineon has a number technologies that are set to grow as they are deployed in automotive from silicon for radar to gallium-nitride and silicon-carbide for power semiconductors.

When asked by Marced what kept him awake at night Ploss said very little as he is lucky to have a temperament that is driven more by curiosity than fear. "I never feel threatened but I am fascinated by opportunities. It is important to recognize change early and to make changes early."

Can the 'Airbus of Chips' Plan Fly?