Can the 'Airbus of Chips' Plan Fly?

The goal for the plan is to unlock spending of tens of billions of euros to try and reverse the decline in electronics and semiconductor manufacturing. The effort has been given the label "Airbus of Chips," although very few observers think shareholder or antitrust interests would allow a significant merger of European companies. As such, Airbus of Chips more likely indicates a hoped-for alignment of European company and regional interests. 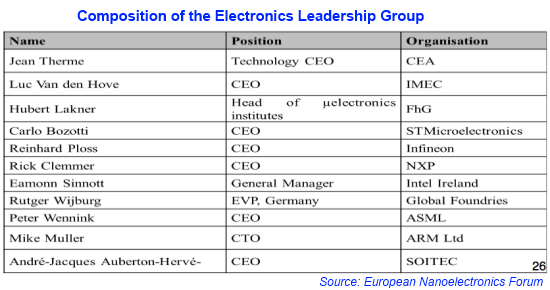 In their deliberations the ELG will have been guided by chairman Ben Verwaayen, who resigned as CEO of telecommunications equipment company Alcatel-Lucent earlier in 2013.

The challenge set down to the group by the formidable Neelie Kroes, European Commissioner for the digital agenda, was to define a European strategic industrial roadmap in electronics, a sector of industry that the European Union of 27 states regards as key to the future economic well-being of the continent.

More specifically, Kroes wants to reverse the long-term decline of chip manufacturing in Europe, which now stands at somewhere between 7 and 10 percent of global production. Under the so-called 10/100/20 initiative, Kroes wants 10 billion euro (about US$13.5 billion) of taxpayers' money to unlock industry investment of 100 billion euro to enable Europe to double manufacturing as a percentage of the global total to 20 percent by 2020.

Kroes, who coined the phrase "Airbus of Chips," believes that Europe needs to recreate the success of Airbus Industrie, which combined several national-champion aerospace companies across Europe at the turn of the millennium to create an aircraft maker that could compete globally.

The problem is that the European electronics and semiconductor companies are fragmented, globally oriented and accountable to shareholders. The leading European chip companies have little interest in such topics as manufacturing on 450-mm-diameter wafers or at 10-nm minimum geometries. Indeed, the leading European chip companies—ST, NXP and Infineon—have all been increasing their use of foundry manufacturing and reducing their capital expenditure as a percentage of sales. This has left Kroes with taxpayers' money to spend on bolstering European manufacturing but almost nobody she can call on to implement her strategy. 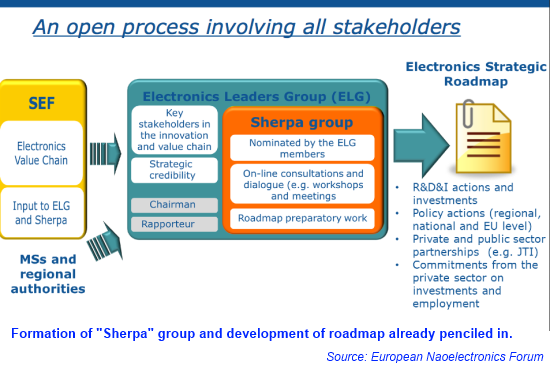 Kroes wants the roadmap to guide public policy and "ensure industry engagement," according to Khalil Rouhana, director of components and systems at the DG Connect of the European Commission, presenting at the European Nanoelectronics Forum in Barcelona recently.

However, the group has had only a few months and, being busy C-level executives, have likely put only a few hours each into this. It makes the nature of what the ELG will come up with in mid-December all the more intriguing. Nonetheless, there appears, from Rouhana's presentation, an intent to create a strategic roadmap based on European policy and financial support on the one side and company commitments to investment and employment on the other.

To turn back the ebbing tide of technology manufacturing in Europe requires something bold and radical—perhaps similar to, or even greater than, what is being attempted by New York state working with IBM and Globalfoundries and others. What seems more likely is some sort of European compromise shrouded in complexity that attempts to keep the maximum number of participants feeding from the European Commission trough.

Any strategic roadmap that the ELG can come up with is likely to have an effect on the Horizon2020 program, which is the overarching European framework for R&D support from 2014 to 2010 with a budget of more than 70 billion (about US$95 billion).

What also remains to be seen is whether the European Commission is prepared to withdraw support from those companies not prepared to step on board the Airbus of Chips.

The conundrum is this: Without a significant position in nanoelectronics in 2020 and thereafter, the continent of Europe could be severely hampered in its ability to generate wealth. And yet modern multinational companies have little or no interest in thinking regionally. Their fiduciary duty is to act in the best interests of shareholders.

If the ELG has cracked that, they will have done very well indeed—but I wouldn't hold my breath.