We've all seen the ubiquitous visual cliché in movies and TV—a doctor putting an X-ray film onto a light box, to explain to others the ailment (or cause of death) and so advance the plot line. But just as conventional cameras using film have been demolished by digital photography, the film-based X-ray is going the way of corded phones and dial tones.

This is not just a speculative future change, either. Anyone who has been to a doctor's office recently most likely has seen traditional wall-mounted light boxes (Figure 1) used for purposes other than the one intended: covered with announcements, bulletins, and personal notes. In other words, these once-dominant units are no longer needed; they have served their purpose, but their purpose is coming to an end. There may be one light box left clean and clear, in case films from another practice need to be viewed. 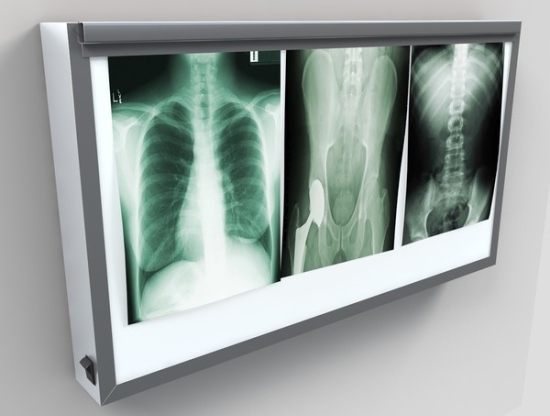 Figure 1: The venerable light box, used for decades for examining X-ray films, is on its way to becoming obsolete as digital radiology becomes prevalent.

This change shouldn't be surprising. As Sarah Jones, analyst for medical electronics at IHS, notes in a recent report (here), "General radiography is undergoing a major transition away from film and toward digital flat panel detector (FPD) technology, with more affordable solutions such as retrofit kits driving this migration in many cash-strapped regions." The report also states that the global market for X-ray equipment used for medical, dental, veterinary, and similar applications reached over $10 billion in 2012, and will rise by 18 percent to $12 billion in 2017 (Figure 2). "Shipments of FDP and retrofit FDP systems accounted for an estimated 15 percent of annual general radiography shipments in 2012. That total is expected to rise to 25 percent in 2017," (Figure 3). 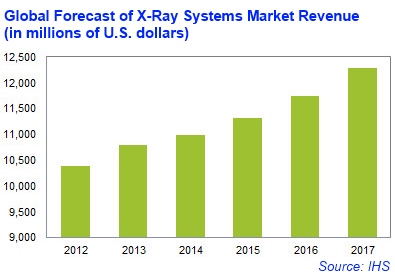 Figure 2: The projection of the digital X-ray market to 2017 shows significant growth, according to an IHS report. (Source: IHS )

Note that the X-ray market in this report includes general radiography, fluoroscopy, mammography, interventional, mobile c-arm, veterinary and dental applications, but does not include computerized tomography (CAT) scanners, which have a very different system configuration. 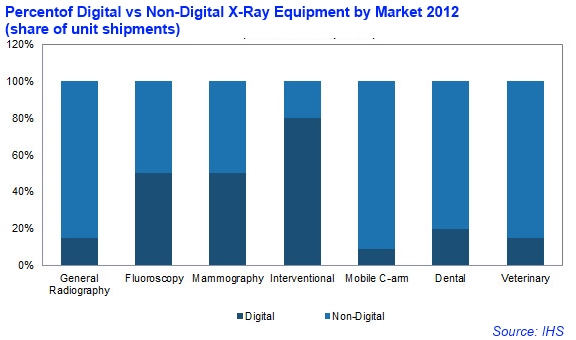 Figure 3: The IHS report shows the inroads that digital X-rays have made in specific medical application segments. Source: IHS.

Figure 4: The signal flow from X-ray source through computer display shows the key functional elements of a digital X-ray design.

The A/D converters take the weak signal from the detector array (comprised of photodiodes and transistors, and somewhat similar to a CCD sensor), which can be configured as a single line array or a two-dimensional flat panel, depending on the machine and applications. While they do not need to operate at those blazing RF speeds and bandwidths, they must provide samples at a fairly high rate and resolution, and with very low nonlinearity (which affects gray-scale performance). These systems also require D/A converters for various control functions, but the technical requirements are much less stringent.

Although the specific numbers depend on the system front-end architecture and how the images are processed, a starting point for the converter is resolution of 12 to 18 bits, sampling times of several hundred nsec or less (>2 Msps), dynamic range of >100 dB, high-speed data transfer, and multichannel operation to save space and power. The required sampling rate may be somewhat higher or lower depending on whether the X-ray system is intended for static imaging (e.g., broken bones) versus dynamic imaging (e.g., cardiovascular studies).

Leading A/D converter vendors have targeted the digital X-ray market with devices that have the appropriate combination of specifications in key parameters that are unique to this application. For example, the AD7960 converter (18 bit, 200 nsec) from Analog Devices, with a deceptively simple functional block diagram (Figure 5) employs an unusual capacitive digital-to-analog converter internally to provide unprecedented noise and linearity without latency or pipeline delay in the IC's analog-digital conversion function. It's also available in a pin-compatible, lower-cost 16-bit version. 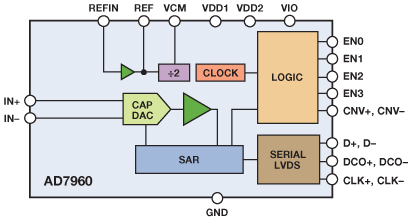 Due to the high number of conversion channels needed in a system, power dissipation and size are also critical, especially with the trend towards battery-operated units. The AD7960 requires less than 40 mW and has just a 5 × 5 mm footprint. Beyond speed and resolution, it features dynamic performance commensurate with the needs of digital X-ray requirements (Figure 6a and 6b).

Figure 6a and 6b: (left) Critical dynamic performance specifications for the AD7960 include signal-to-noise ratio (SNR), signal-to-noise and distortion (SINAD), total harmonic distortion (THD), and spur-free dynamic range (SFDR), here, each is better than 100 dB; (right) integral nonlinearity is also critical, and for the AD7960 it is better than ± 0.5 LSB.

Converter competitor Texas Instruments is also active in the digital X-ray market, with converters such as the AFE0064 (Figure 7), a 64-channel multiplexed analog front end. In addition to the multiple integrators, it includes functions such as a programmable gain amplifier (PGA) for charge-level detection. Key specifications include 28 μsec scan time (including integration and data transfer for all 64 channels), and a 7.5 MHz data transfer rate, along with ±0.006 percent integral nonlinearity for proper rendering of image shading. Although its 14mm × 14mm package is larger than the ADI converter, it has more channels and includes more of the required peripheral functions, so effective PC board real estate is comparable. 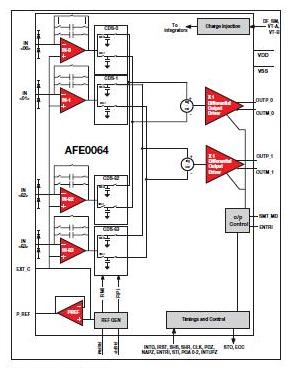 Figure 7: The AFE0064 from Texas Instruments packs a 64-channel multiplexed A/D converter plus support circuitry into a single IC.

For converter vendors, the opportunity is not just the converter itself. The complicated electronics of an X-ray system requires many analog, mixed-signal, and power-management ICs (Figure 8), which these vendors offer as well. While the converter is the most technically challenging IC, and the one that drives the device architecture, the overall BOM potential is far larger than the converter alone, greatly adding to the attraction of this market for vendors with broad, diverse product lines. 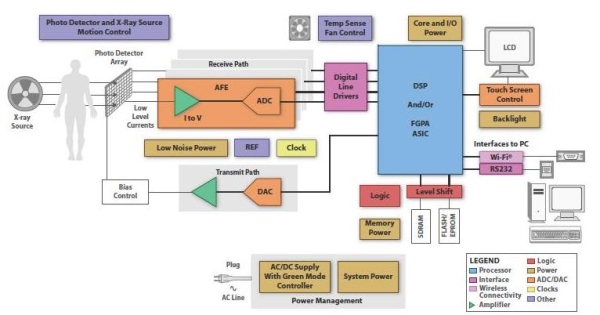 Figure 8: In addition to the A/D converter, digital radiography systems require a significant number of analog, mixed-signal, and power management functions, making them an attractive broader opportunity for the converter vendor.