As expected, Apple Tuesday unveiled two new iPhone models, the new flagship iPhone 5s and the lower-priced iPhone 5c. Though the introduction of a fresh model for the midrange smartphone market represents a bold departure from Apple's previous strategy, the iPhone 5 remains too expensive to spur an immediate increase in iPhone sales, according to IHS.

The iPhone 5s is powered by Apple's all new A7 applications processor, making it the first smartphone with a 64-bit desktop-class architecture, Apple said. The A7 offers up to twice the processing and graphics performance of its predecessor, according to the company.

Both new iPhone models are expected to be widely available in the U.S. and many countries on Sept. 20. 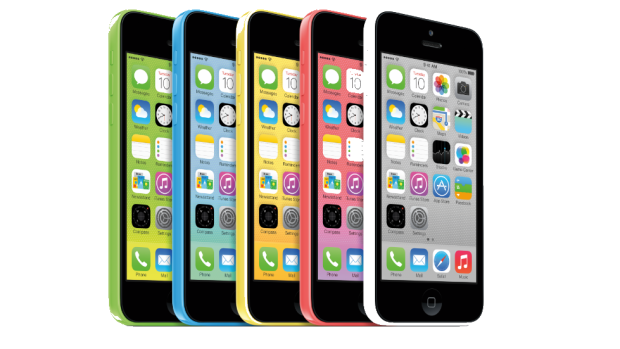 The iPhone 5c marks the first time Apple has built a fresh handset design for the midrange smartphone market. The 5c is expected to be available in the U.S. at a subsidized cost of as low as $99. But the unsubsidized cost of the iPhone 5c, $549, remains the same as the existing mid-range iPhone, the 4S.

Apple's offering of a lower cost iPhone was widely expected. But with an unsubsidized cost of $549, the iPhone 5c is remains too expensive to spur an immediate increase in iPhone sales, according to Francis Sideco, director for consumer electronics and communications technologies at IHS.

"If Apple had hit a $350 to $400 unsubsidized price range for the iPhone 5c, as some had speculated, the company might have had a chance to expand its smartphone shipments beyond what we originally expected in the second half," Sideco said. "Even at a subsidized price of $99 with a two-year contract, the 5c will not spur sales because it does not materially expand Apple's addressable market past the level we had already taken into account." 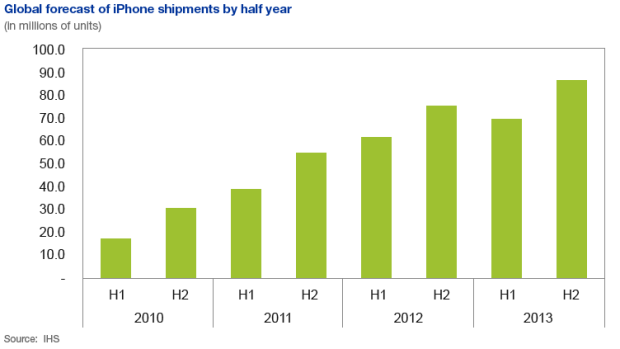 According to IHS, the iPhone is facing increased competition from the likes of Samsung, Sony, HTC and LG, all of which are releasing strong smartphone flagships in 2013. The firm noted that Apple's portfolio lacks large-screen smartphone models with 5-inch, 1080p displays.

According to Ian Fogg, director of mobile and telecoms at IHS, the new iPhone models are Apple's stopgap measure to bolster its share of the global smartphone market in the face of rising competition. While the updates are necessary for Apple's success in the smartphone market in 2013, Apple needs to do more to shore up its handset line for the longer term, Fogg wrote in a report circulated shortly after the new products were launched.

"Apple will need to innovate significantly in 2014 with both improved software and new iPhone hardware to counter the growing threat from Android smartphones and ensure that Apple's mobile success continues," Fogg said.

Fogg said that by using a visibility different design for the iPhone 5c rather than repurposing an older flagship model, Apple is minimizing the risk that the iPhone 5c will cannibalize sales of its more expensive iPhone models.

While other smartphone makers have stereotyped Apple as a competitor only in the premium segment, Apple is choosing to take the battle to their home turf by expanding new iPhone model's aspirations, Fogg said. "Now, new iPhone models will compete head-to-head with many more smartphone models from these rivals," he said.

Fogg said the new security measures Apple is including in iOS7 and the 5s will make the iPhone an even better platform for monetization. The fingerprint sensor on the new 5s helps make the iPhone a safer device for users to entrust with financial details as well as helping users to safely buy App Store apps, he said. Apple is also making it harder for thieves to bypass security features because users now need an Apple ID and password to turn them off, he added.

Apple also announced Tuesday that the iPhone 5s and iPhone 5c would both be available in Japan on leading Japanese mobile operator NTT DoCoMo's network starting Sept. 20. Fogg said the new operator deal would slightly increase the addressable market for iPhone. He added that the iPhone 5c's improved 4G LTE band support will also make it more attractive to European operators than the older iPhone 5, which supported only one European LTE band: 1800 Mhz.