Over the Horizon: Nanotech Transistors and Thermoelectric Materials

Every month, Electronics360 Contributing Editor Abe Michelen surveys academic and technical journals to uncover promising research that will impact the development of “over the horizon” commercial products that could well impact our lives in the future.

A new generation of transistors: the demise of semiconductor materials

According to Yoke Kin Yap of Michigan Technological University, transistors based on semiconductor materials can only get so small. "At the rate the current technology is progressing, in 10 or 20 years they won't be able to get any smaller," Yap says. "Also, semiconductors have another disadvantage: they waste a lot of energy in the form of heat," he adds.

For some years scientists, including Yap, have tried to create transistors by avoiding the use of any semiconductor material, thus opening the door to a new electronic age. We have seen that grapheme, nanotubes, nanowires and other similar materials have been used successfully in a lab environment. In 2007 Yap wanted something different. The idea of a transistor is simple: an insulator and a conductor on top of it.

"The idea was to make a transistor using a nanoscale insulator with nanoscale metals on top," Yap said. "In principle, you could get a piece of plastic and spread a handful of metal powders on top to make the devices, if you do it right. But we were trying to create it in nanoscale, so we chose a nanoscale insulator, boron nitride nanotubes, or BNNTs for the substrate."

Yap’s team, in collaboration with scientists at Oak Ridge National Laboratory (ORNL), already knew how to manufacture BNNT and knew that it is an excellent insulator, similar to silicon dioxide. To create the transistor they used lasers to implant quantum dots (QD) of gold on top of a carpet of BNNT. The quantum dots used are as small as three nanometers in diameter. This produced a simple transistor: the gate is represented by the QDs and the gate-channel insulation is the BNNT. The figure below depicts the QDs-BNNTs structure. 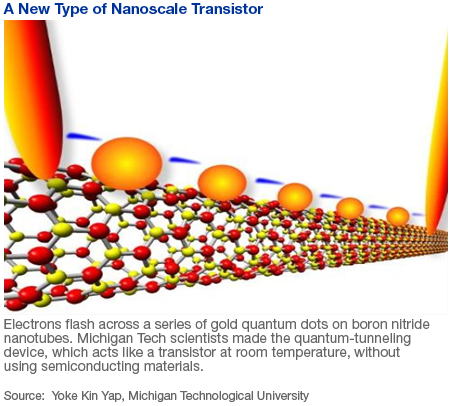 The only part left to be built was the transistor’s channel, where electron flow can be produced. But Yap’s team did not have to build an actual channel. They decided to attach two electrodes on both ends of the QDs-BNNTs structure and apply a small voltage at room temperature. At this point something interesting happened: electrons from the gold QDs jumped from dot to dot (this is the phenomenon known as quantum tunneling) creating a current flow. The virtual channel was the set of QDs aligned on top of the insulator.

"Imagine that the nanotubes are a river, with an electrode on each bank. Now imagine some very tiny stepping stones across the river," said Yap. "The electrons hopped between the gold stepping stones. The stones are so small that you can only get one electron on the stone at a time. Every electron is passing the same way, so the device is always stable."

When a voltage is applied, the tunneling field-effect transistor switches to a conducting state; when the voltage is zero or very small, the device behaves like an insulator (its natural state) because no electrons will move from dot to dot. This transistor is free of any semiconductor material, it is very small (less than 1 micron long and only 20 nanometers wide), it works at room temperature, and it does not produce any leakage because no electron from the QDs will move to the insulating BNNT. Leakage is the source of heat and waste of energy in silicon devices.

A full description of this research is found in the July 2013 issue of Advanced Materials.

The electronics community has been exposed to new and novel types of transistors for several years now. Most of them are supposed to be faster, more reliable and (hopefully) easier to build than the silicon-based transistors that we have been dealing with since the early 1960s. The new generation of transistors will make silicon an obsolete material, and will be based on the properties of certain materials at the nano scale. Nanotechnology, it is expected, will eventually replace the standard manufacturing processes the semiconductor industry has relied on for decades.

In May, another type of transistor was described by researchers at the University of California at Santa Barbara (UCSB) in collaboration with researchers at the University of Notre Dame, with support from the National Science Foundation. They reported in the May issue of the Nano Letters magazine the development of a transistor made of a monolayer of tungsten diselenide (WSe2). This is a two-dimensional atomic crystal known as a transition metal dichalcogenide (TMD). This discovery is significant because this is the first time that a field-effect transistor could be developed using WSe2, showing the tremendous potential of WSe2 as a future material for high-performance integrated circuits.

WSe2 is a crystal very similar to grapheme in that it has a similar hexagonal structure. However, WSe2 has an important advantage over grapheme, as explained by Kaustav Banerjee, professor of electrical and computer engineering and Director of the Nanoelectronics Research Lab at UCSB. "In addition to its atomically smooth surfaces, it has a considerable band gap of 1.6 eV," said Banerjee.

"There is growing worldwide interest in these 2D crystals due to the many possibilities they hold for the next generation of integrated electronics, optoelectronics and sensors," commented Pulickel Ajayan, the Anderson Professor of Engineering at Rice University and an authority on nano materials. "This result is very impressive and an outcome of the detailed understanding of the physical nature of the contacts to these 2D crystals that the Santa Barbara group has developed."

Banerjee's group is the pioneer of the methodology using ab initio Density Functional Theory (DFT) that established the key criteria to develop the best possible contacts to the monolayer TMDs. The DFT technique was pioneered by Professor Walter Kohn of UCSB as a result of work that led to his Nobel Prize in Chemistry in 1998.

"At a recent meeting with Professor Kohn, we discussed how this relatively new class of semiconductors is benefitting from one of his landmark contributions," said Banerjee.

Wei Liu, a post-doctoral researcher in Banerjee's group and co-author of the study, explained: "Guided by the contact evaluation methodology we have developed, our transistors achieved ON currents as high as 210 uA/um, which are the highest reported value of drive current on any monolayer TMD based FET to date."

Also, the team was able to achieve mobility of 142 cm2/V.s, which is the highest reported value for any back-gated monolayer TMD FET.

Thermoelectric materials convert heat directly into electricity. There are many types, but scientists have been looking for more efficient materials to be used in energy applications. The challenge is how to predict or determine if a material is thermoelectric and how to identify it. Thermoelectric materials have been in use since the 1950’s as power generators for spacecraft. These generators are quiet (they do not have moving parts), very reliable and require minimal maintenance. They are, however, very inefficient and the materials needed to build them are very expensive. This is the reason these thermoelectric generators are limited to very specific applications such as spacecraft.

Recently the need for non-carbon-based energy generations has led to a new interest in thermoelectric materials that could generate electricity from wasted heat produced by our factories and our engines. More than 60 percent of the energy produced by vehicles and machines around the world is lost as waste heat. To this end, researchers at the California Institute of Technology (Caltech) and the University of Tokyo showed that a simple technique called “rigid-band approximation” can be used to identify thermoelectric materials more accurately and cheaply than more complicated methods. Their research has been published in the June 2013 edition of the APL Materials online journal.

Thinking about the efficiency of existing thermoelectric materials, Snyder said that "if we could double their efficiency, then thermoelectric modules incorporated into an automobile engine's exhaust system could generate enough power to replace the alternator, which would increase the car's gas mileage.”

To create an efficient thermoelectric material, scientists must be able to choose the right combination of alloys, crystal sizes and dopant. With so many combinations to choose from, they use numerical theoretical calculations to guide their research.

The complexity of the problem has created different lines of thought among theorists and has led to different approaches. It turns out the simplest approach is rigid-band approximation, which is an algorithm that provides a simple model of the electronic structure of materials; the most complex method, dubbed the “supercell approach,” gives an accurate and detailed picture of such structure. The consensus within the scientific community—at least so far—is that the rigid-band method is overly simple and can’t predict with accuracy the material structures.

Snyder’s group, however, reported exactly the opposite: the rigid-band method is more accurate than the supercell method in predicting properties of thermoelectric materials, in particular for important materials such as lead-telluride doped with sodium, potassium and thallium.

"Supercell approaches are accurate for very specific dopant cases, but they do not take into account the various defects present in real materials," Snyder said. “By using the simpler rigid-band model, scientists should be able to more quickly identify promising new and more efficient thermoelectric compositions.”