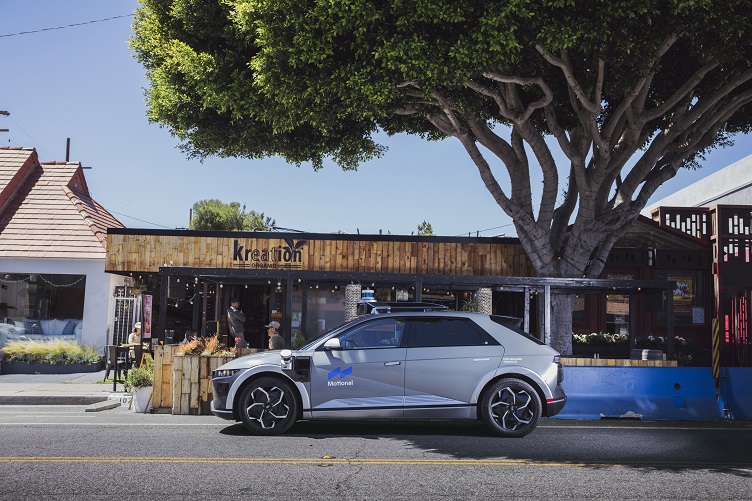 A Motional IONIQ-5 all-electric robotaxi is being used as a delivery vehicle for Uber Eats in Los Angeles and now will be used for ride-hailing in Las Vegas on the Uber network. Source: Motional

Motional will team with Uber as part of a new robotaxi service in Las Vegas, the first time the autonomous vehicles will be used on Uber’s network.

Motional, the joint venture between Hyundai Motor Group and Aptiv, said it will then expand the service to Los Angeles later.

The rollout follows a similar pattern Motional made with Lyft where their relationship began with robotaxi services in Las Vegas and just recently expanded services to Los Angeles.

The Motional and Uber deal will use Motional’s all-electric Hyundai IONIQ-5-based robotaxis, which the company unveiled last year. The goal will be to launch fully driverless commercial service to the public in 2023, although initially service will include a safety driver.

“Today, Motional becomes the first AV company to conduct all-electric autonomous rides on the Uber network for public passengers,” said Akshay Jaising, vice president of commercialization at Motional. “Las Vegas is the first of many cities in which Motional’s AVs will become an everyday transportation option for Uber customers looking for a safe and convenient ride.”

The robotaxi project is the first in Motional and Uber’s 10-year commercial partnership that was finalized recently.

The Hyundai IONIQ-5 robotaxis will include Level 4 autonomous vehicles deployed for ride-hail and deliveries on the Uber network. This will include Uber Eats, which began autonomous deliveries in greater Los Angeles earlier this year. The success of the service allowed the companies to expand to additional restaurants in the city.

With both deliveries and rides, Motional claims it is the first autonomous vehicle company to conduct both on a major transportation network.

Riders in Las Vegas can get a ride in a Motional robotaxi by going on the Uber app and choosing an autonomous vehicle for trips.