Developing an autonomous vehicle for all riders 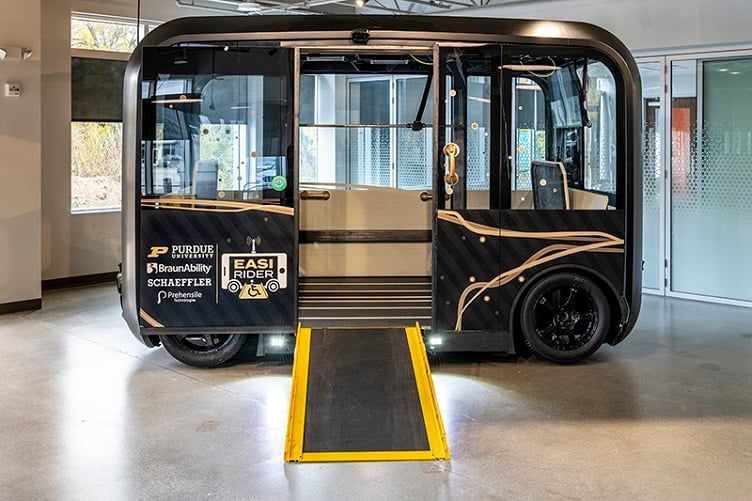 The prototype autonomous vehicles with the smart ramp that uses sensors to not deploy the wheelchair ramp into obstacles when parked. Source: Purdue University

Researchers at the University of Purdue have developed a prototype autonomous shuttle that will allow all riders to use automated technology, even those with disabilities.

Called Efficient, Accessible and Safe Interaction in a Real Integrated Design Environment with disabilities (EASI RIDER), researchers have created an autonomous vehicle that can be operated by people with a physical or sensory disability, operating the different controls all by themselves.

The autonomous vehicle is not only voice activated and wheelchair accessible, but it also uses sensors to prevent inadvertent deployment of the wheelchair ramp into obstacles when parked. The prototype can accommodate up to two wheelchair users at once and has reconfigurable seats for riders who do not use wheelchairs.

Cameras and sensors in the vehicle help passengers to understand the surroundings of the vehicle and allow a remote operator to communicate with them in case of an emergency. The control functions are used through a smartphone or tablet including interior lighting, horn, headlights and entertainment. A screen inside the EASI RIDER allows users to see the map and the route they are taking in case someone is hearing impaired and can’t hear sounds from the vehicle.

“A lot of the features we included in the vehicle were intended to enable what we call a ‘seamless travel experience,’ which means that interacting with the vehicle is so natural that a person doesn’t know they’re interacting with it,” said Brandon Pitts, an assistant professor of industrial engineering at Purdue. “Many of the same design solutions tested in my lab that aim to help aging adults better use digital technologies can also be used to support individuals with a range of disabilities.”

The EASI RIDER prototype was built using parts and the experience from three other companies: Local Motors, Schaeffler and Prehensile Technologies, which specializes in robotics and power sensor systems for wheelchair users. Prehensile also is a client of the Purdue Foundry, a commercialization hub for professionals to help Purdue innovators create startups.

Local Motors has been testing autonomous shuttles for the better part of a few years, including a pilot project that took place at the Marine Corps Air Station (MCAS) in Miramar, California.

The next steps are to establish a center on accessible design for transportation at Purdue. The center will be used to engage with industry partners and governmental bodies to help to work toward inclusive autonomous vehicles and standards.

“We envision that our work will help build a more equitable transportation future and, in turn, promote a higher quality of life for people at different points along the ability spectrum,” Pitts said.

Additionally, the research team will continue to work on developing new technologies for a wide range of disabilities.