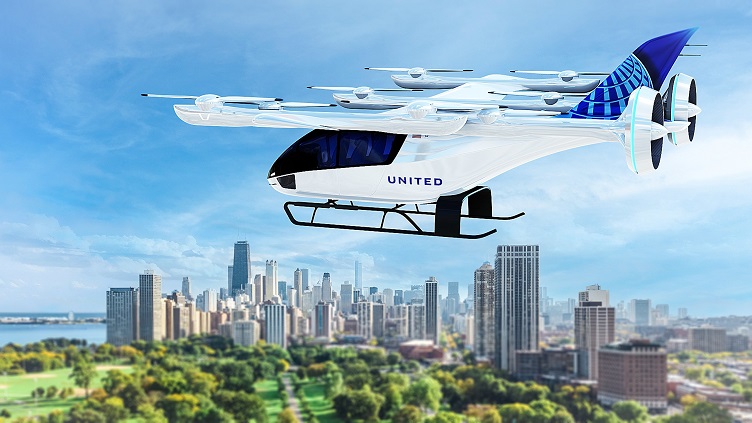 An artist rendering of the four-seat eVTOL air taxis that United Airlines has ordered from Eve Air Mobility. This is United’s second investment in air mobility vendors and second order for air taxis. Source: United Airlines

In the second major investment in electric take-off and landing (eVTOL) aircraft, United Airlines will invest $15 million in Eve Air Mobility with a conditional purchase agreement for 200 four-seat air taxis.

The move shows that major airlines are more actively taking an interest in the eVTOL and air mobility space as the technology is advancing quickly to deployments. Just last month, United Airlines paid $10 million in a pre-delivery payment to Archer Aviation after ordering 100 air taxis.

United placing the order for the 100 eVTOLs from Archer and now another 200-air taxi order with Eve Air signals that the airliner will bring these to market in the U.S., likely as urban transportation from city to city or inter-city travel. First deliveries of the air taxis are scheduled for as early as 2026.

It also signals that major airlines are seeing a demand and desire from consumers in this transportation technology even though commercial deployment has not begun.

United said that the significant investment in air taxis is due to the potential to revolutionize the commuter experience in cities globally.

Under the agreement, United and Eve Air will work together on future projects including studies in the development, use and application of eVTOLs as well as urban air mobility ecosystems. The agreement also calls for an additional 200 options for even more air taxis if United wants.

United said it is the first major airline to publicly invest in two eVTOL companies and will be part of how the company plans for net zero carbon emissions by 2050.

United also said the investment in Eve Air was driven by confidence in the growth in the air taxi market and opportunities to create new use cases in air mobility.

A range of air taxi vendors has accelerated testing of aircraft as technology has progressed to a point where commercial flight is not just feasible but also not far away. In fact, the inflection point for the debut of many air taxis is in the 2024 to 2025 time frame due to two main events happening that will heavily feature air taxis.

The first is the 2024 Paris Summer Olympics where many air taxi companies will be participating to bring games visitors back and forth from other locations. Olympic officials and members of the French government are currently testing flying air taxis at the Pontoise-Cormeilles-en-Vexin airfield in Paris and participating air taxi vendors include Volocopter, Airbus, Vertical Aerospace and Ascendance, Lilium and Joby Aviation — all startups that are currently developing fleets of air taxis.

The 2024 Summer Olympics will focus on two lines: First, between the Paris-Issy-les-Moulineaux heliport and the Saint-Cyr airfield; and second, between Paris-Charles de Gaulle and Le Bourget airports and Paris.

The second event is Osaka World Expo 2025 in Japan where eight flying air taxis routes will be used to ferry passengers to the event at about 20 flights per hour. The project is billed as Japan’s first flying taxi network for transporting passengers.

In July, EHang tested four flight locations in Japan for its unmanned EH216 eVTOL aircraft. EHang will be one of the vendors that will participate in the Osaka World Expo 2025 and the flights were in preparation for the event.