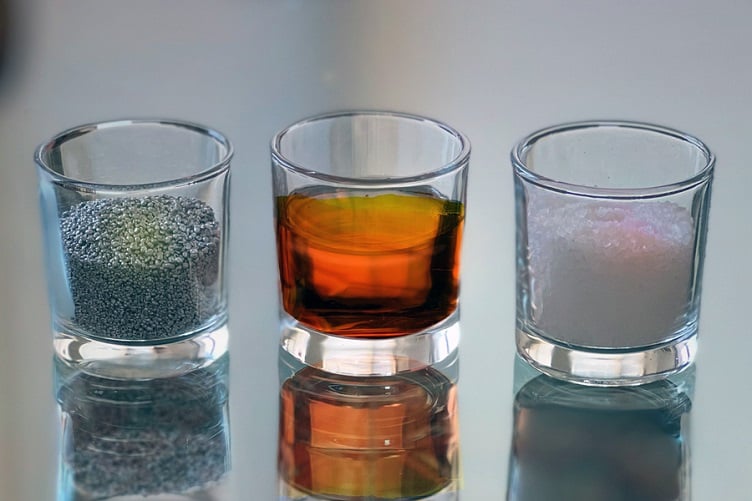 The three materials used in the MIT battery include aluminum, sulfur and molten salt. The cheap and abundant materials could change the game for battery use in renewable energy, EVs and portable devices. Source: MIT

The market for lithium-ion batteries has never been more in demand.

Portable devices among consumers are at an all-time high and the automotive industry is currently in its largest transition in its history to all-electric vehicles (EVs)in order to fight climate change, meet government mandates and appease demand from consumers.

However, this high demand is bringing with it a potential shortage in the coming years for both lithium-ion batteries and the raw materials used to create these batteries. Currently, prices for raw materials used in the production of lithium-ion batteries — including cobalt, nickel and lithium — is skyrocketing, rising four-fold since the start of the COVID-19 pandemic, potentially leading to a rise in the price of EVs.

Researchers at MIT may have a solution in a new kind of battery that is made from abundant materials that are also inexpensive.

The new battery architecture uses aluminum and sulfur as its two electrode materials with a molten salt electrolyte in between.

MIT said current lithium-ion batteries are still too expensive, specifically for use in renewable energy systems such as wind and solar power systems as well as pumped hydro, which requires specific topography that’s not always available.

“I wanted to invent something that was better, much better, than lithium-ion batteries for small-scale stationary storage, and ultimately for automotive [uses],” said Donald Sadoway, a professor of materials chemistry at MIT.

Current lithium-ion batteries are not just made from metals that are hard to acquire, but they also contain a flammable electrolyte, which when used inside automotive vehicles is not ideal. MIT looked to abundant metals as a substitute for lithium and settled on the second most abundant metal on Earth — aluminum.

MIT decided to pair the aluminum with a cheap electrode to carry ions back and forth during charging and discharging. Sulfur was chosen as the second electrode material and molten salts were used for the electrolyte due to its relatively low melting point.

MIT said the three ingredients in the new batteries are cheap, easily available and safe from fire.

In testing, the battery cells could endure hundreds of cycles at high charging rates with a projected cost per cell of about one-sixth that of comparable lithium-ion cells. The charging rate was dependent on the working temperature with 100° C showing 25 times faster rates than 25° C.

The molten salt turned out to be a very good choice as it prevented malfunction in batteries and improved reliability. The chloro-aluminate salt allows for rapid charging without the formation of dendrites, which are metal spikes that build up on the electrode and could eventually short-circuit or hamper the efficiency.

Additionally, the battery does not require an external heat source to maintain its operating temperature. The heat is produced naturally due to electrochemically charging and discharging of the battery.

“As you charge, you generate heat, and that keeps the salt from freezing,” Sadoway said. “And then, when you discharge, it also generates heat.”

Uses for the battery

This could be ideal for solar generation because the system stores electricity when the sun is shining and then draws on the electricity after dark. The charge-idle-discharge-idle cycle is enough to generate heat to keep the battery at low temperatures.

MIT said the battery could be used in installations of about the size needed to power a single home or small to medium businesses, which would produce about a few tens of kilowatt-hours of storage capacity.

The aluminum-sulfur batteries could also be used in EV charging stations. When these EVs become common enough on roads that several cars could be charged at once, a battery system to release stored power and eliminate the need for installing expensive new power lines might be a solution for the new demand that is expected.

The full research can be found in the journal Nature.