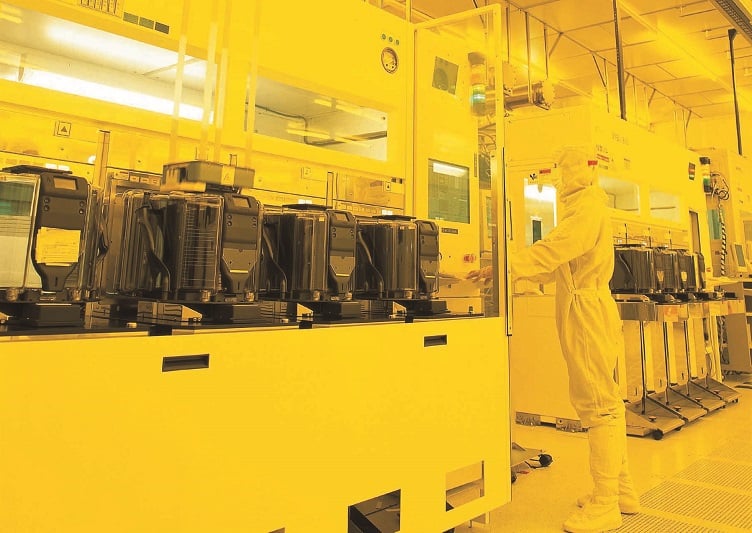 A TSMC worker in a cleanroom at a semiconductor fab. With President Biden expected to sign the CHIPS Act into law, domestic semiconductor manufacturing will see an increase in the U.S. Source: TSMC

U.S. President Joe Biden is expected to sign the CHIPS Act after the House of Representatives passed the bill last week.

The bill has been one of Biden’s key pieces of legislation to bolster domestic semiconductor manufacturing in response to the ongoing chip shortage that has impacted the electronics supply chain since the early days of the COVID-19 pandemic.

The lasting impact of the COVID-19 pandemic has companies and governments worldwide scrambling to increase domestic manufacturing to avoid the pitfalls of semiconductor manufacturing aggregation being located primarily in Asia. The goal would be to increase the regions where semiconductors are made to cushion the blow against any future pandemics or problems that arise or if future geopolitical conflicts disrupt the supply chain.

U.S. Senator Mark R. Warner (D-VA), Chairman of the Senate Select Committee on Intelligence, issued a statement after the House of Representatives voted 243-187-1 to approve the CHIPS and Science Act of 2022, a historic bill to incentivize domestic manufacturing of semiconductors and improve U.S. technological competitiveness:

“I first began sounding the alarm about the need to reduce our reliance on other nations and safeguard our national security by bringing semiconductor production back to the U.S. more than two years ago,” said Senator Warner. “Since then, we’ve seen the consequences of semiconductor shortages all the way up the supply chain and down to consumers, who have faced rising costs on a variety of goods both large and small.”

The CHIPS Act would provide $52 billion in incentives and tax breaks for semiconductor manufacturers to build new fabrication facilities, or fabs, inside the U.S. It would also supply funding for high tech research programs, R&D and other technological developments to help America stay competitive.

Intel CEO Pat Gelsinger praised Congress for passing the CHIPS Act and called it a “critical step” for chipmaking in the U.S. and will “ensure continued American leadership in semiconductor manufacturing.”

Intel is currently building two fabs at its Ocotillo campus in Chandler, Arizona, that will be used for its new Intel Foundry Services (IFS), which will provide semiconductor manufacturing for fabless U.S. and European companies. It has also pledged to build two additional fabs in Licking County, Ohio, spending about $20 billion, however, it was waiting for the passage of the CHIPS Act before breaking ground.

Two of the leading semiconductor manufacturers — Taiwan Semiconductor Manufacturing Co. (TSMC) and Samsung Electronics — have both lobbied for the CHIPS Act funding to be applied to foreign companies as well as both companies are currently building state-of-the-art fabs inside the U.S.

TSMC has already started construction on its Arizona fab that the company is investing $12 billion in. Production is slated to begin in 2024 and once completed will manufacture 20,000 300 mm wafer per month. TSMC has floated the idea that it may turn that Arizona site into a “gigafab” with investments ranging in the $35 billion range for multiple production facilities built over the next 10 to 15 years. This may depend on the CHIPS Act funding and if TSMC is able to get incentives.

Meanwhile, Samsung is building a $17 billion fab in the city of Taylor, Texas, about 30 miles outside of its existing manufacturing facility in Austin, Texas. Samsung last month filed documents with the Texas Comptroller of Public Accounts for plans to build as many as 11 new fabs in the region. This may also depend on the outcome of the CHIPS Act and where funding is allotted.

GlobalFoundries (GF), a semiconductor foundry based in New York, plans to build a new chip fab in Malta, New York, next to its current Fab 8 facility in the region. The fab will create more than 1,000 new direct high-tech jobs and thousands of indirect jobs including construction. The capacity will be used to meet growth markets such as automotive, 5G and the internet of things (IoT).

“The investment being made will pay dividends through creation of high-paying jobs, community vitality, research and development, and innovation in the U.S.,” said Thomas Caulfield, president and CEO of GF. “For GlobalFoundries, joint GF-customer-government partnership is a great example of how our nation’s greatest challenges can be solved by embracing new strategies and partnering together.”

U.S. memory chip maker Micron Technology issued a statement applauding the Congressional passing of the bill and said it has an historic opportunity to invest in bringing leading-edge memory manufacturing to the U.S. Micron did not elaborate, but said it will share more details in the coming weeks.