Samsung, TSMC lobby for inclusion in CHIPS for America Act 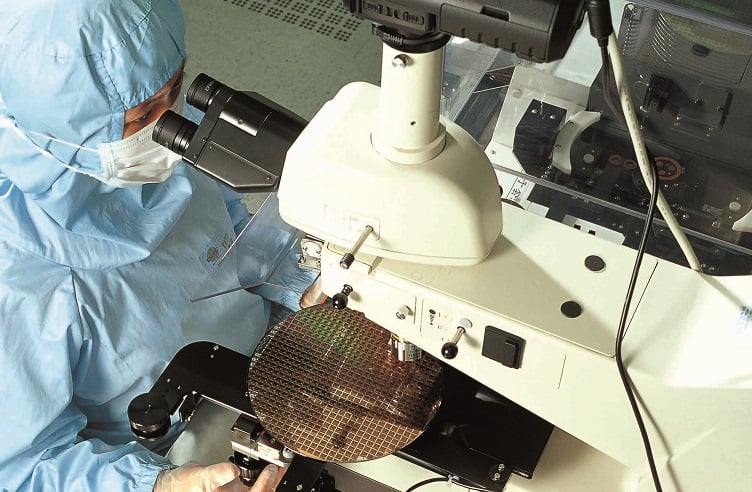 An Intel engineer examines a semiconductor wafer at a fab. With new funding on the horizon for semiconductor manufacturing in the U.S., TSMC and Samsung want a piece of the pie. Source: Intel

The CHIPS Act would provide more than $52 billion to invest in domestic U.S. chip manufacturing and research. The bipartisan act aims to enhance the competitiveness of the U.S. by promoting American science and technology leadership.

Both the Senate and the House have passed versions of the CHIPS Act but differ on specific provisions. And just this week, the Senate approved the bill again, which will send the legislation back to the House of Representatives to launch a formal process to seek a compromised version of both houses of Congress. Once the compromised version is complete, it would be sent to President Joe Biden to sign it into law.

TSMC and Samsung are currently both building fabs in the U.S. TSMC recently broke ground on its $12 billion fab in Arizona while Samsung chose Taylor, Texas, to build its $17 billion facility last year.

However, according to a new report from DigiTimes Asia, TSMC may not be able to generate profits from its fab in Arizona when it becomes operational without subsidies and support.

Therefore, TSMC said in a statement that the CHIPS Act “should be implemented in a way that any company in the semiconductor ecosystem capable of enhancing U.S. supply chain resilience is eligible to apply for and receive such incentives.”

Additionally, TSMC said this would encourage a level playing field and encourage investment in the U.S. for manufacturing activities such as fab construction. Allowing overseas companies access to incentives and support would help create a virtuous cycle to reduce operational costs and attract even more investments.

Samsung echoed TSMC with its own statement to the U.S. government. The company said its $17 billion investment in Texas represents one of the largest foreign direct investments in U.S. history, which will support the supply chain and create more than 2,000 jobs as well as thousands of support jobs.

“At its core, Samsung’s significant investment in the U.S. semiconductor manufacturing industry is strengthening semiconductor supply chain, invigorating research and development, and supporting the growth of skilled workforce in America,” Samsung said in a statement.

Therefore, the U.S. government should measure what investments go to which qualifying companies, regardless of that company’s origin, based on merit and to fund an “even playing field.”

TSMC and Samsung’s concern comes from Intel Corp. suggesting last year that U.S. taxpayers’ money should only go to domestic companies. However, it is not a point Intel has made frequently.

When the pandemic revealed flaws in the aggregation of semiconductor manufacturing, which is mostly located in Taiwan, China and Korea, Intel began making moves to increase its manufacturing prowess, building four fabs in North America — two in Arizona and two in Ohio — as well as expanding into the foundry business.

According to the Semiconductor Industry Association (SIA), the U.S. manufactures about 12% of all chips made globally, this is down from about 37% in the 1990s. If the supply chain remains the same or the situation worsens, this will more than likely decline to 10% or less in the coming years as more manufacturing capacity is built in other countries to meet demand.

The decline is due to substantial incentives offered by foreign governments, placing the U.S. in a competitive disadvantage for attracting new construction of chip manufacturing fabs. While other governments have invested substantially in research initiatives, the U.S. tax incentives lag. Intel is seeking the U.S. to eventually manufacture one-third of all semiconductors globally.

To fight against potential problems that may crop up in the future — whether it be a future pandemic or other geopolitical issues — the goal is to diversify where semiconductors are manufactured to curb the impact on the supply chain.