How streetlights can create smart cities 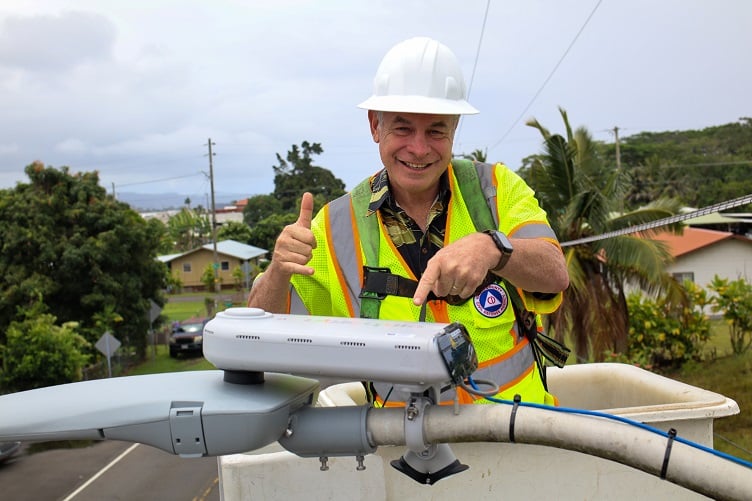 Mitch Roth, the mayor of the County of Hawai’i, helps to install a UbiHub on a streetlight in the region. The municipality is using the smart city hubs to bring free broadband access to Pana’ewa Park. Source: Ubicquia

Called UbiHub, the platforms are compatible with more than 360 million streetlights worldwide and can be installed in seconds by replacing the existing streetlight photocell socket. According to Northeast Group, a smart infrastructure market intelligence firm, integrating multiple functions into one platform for smart cities is a way to reduce the cost of ownership for municipalities by 42% compared to conventional solutions.

The platforms allow cities and law enforcement to transform existing streetlights into a network of connected digital assets, Aaron said.

UbiHub can enhance existing use cases by:

The UbiHub AP6 is a triband Wi-Fi access point that gives communities and municipalities the ability to enable public Wi-Fi. It uses power over Ethernet to support third-party equipment including cameras or license plate readers.

Ubicquia has already deployed the systems to several cities in the U.S.

In West Hollywood, California, the city is using the platforms for smart city traffic and curb management capabilities for data on traffic, bicycle and pedestrians as well as public safety measures and future planning development needs for its residents.

In the county of Hawai’i, UbiHub is being used to bring free, high-speed internet to Pana’ewa Park, a recreational and educational area in a zoological and botanical area of the county. The city said the deployment of the streetlight platform is an important step to expanding its broadband and closing the digital divide throughout Hawai’i Island.

There have been 12,500 UbiCells deployed in Ontario, California, for smart lighting analytics and energy savings. The city said the system helps the digital divide by rolling out public Wi-Fi and boosting public safety in one platform.

Streetlights as a smart city solution

Northeast Group said the ease of adding smart city infrastructure to streetlights has helped accelerate the deployment of these technologies for municipalities and communities.

While many of these smart city features are new for most local governments and will present challenges for city leaders, these trials can be overcome through improvements in the technology and by learning through the examples of municipalities already pioneering smart city functions, Northeast Group said.

And Ubicquia is not the only company working on these technologies.

Last year, Signify and the Smart City infrastructure Fund demonstrated how smart lamp posts can tackle tasks such as overcrowding, traffic management and body temperature detection. This came as the world was still dealing with the COVID-19 pandemic and looking for ways to help improve the situation through technology.

Smart lighting and streetlights have also become an important way for cities to increase 5G infrastructure with the deployment of small cells that boost signals inside cities where they may have trouble moving through buildings, trees and other objects.

Telensa and Eaton Lighting collaborated on a project to integrate lighting, control and smart city solutions using existing streetlight infrastructure to serve as a way for municipalities to save on energy but also put them on a path toward smart city applications.