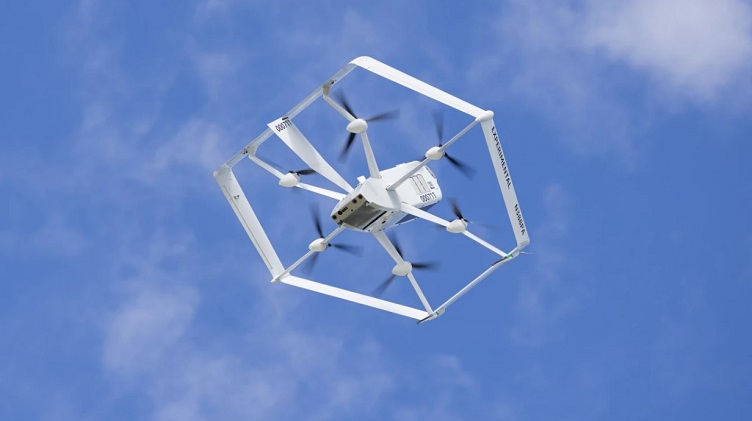 The latest drone design for Prime Air includes a hexagonal design for six-degree stability. The propellers are designed to minimize sound. Source: Amazon

Amazon Inc. told customers in Lockeford, California, that they would be among the first to receive Prime Air deliveries via drones.

Lockeford is home to Weldon B. Cooke who built and flew planes in the early 1900s and has historic links to the aviation industry. Now, Amazon will test its drone delivery in the city as Prime Air will deliver packages to backyards and create a service that will scale to meet customer needs in the area.

Amazon said it will invest in creating new jobs, building partnerships with local organizations and helping reduce carbon emissions. The goal is to one day see Amazon drones as commonly as seeing an Amazon delivery van in neighborhoods, the company said.

Amazon has been working on drones over the past decade. Its latest, the MK27-2, features a hexagonal design that provides six-degree stability and propellers that are specifically designed to minimize high-frequency sound. Amazon is working on visual observers along the route of every flight in Lockeford to help the drones avoid hazards.

Additionally, the system will have a sense-and-avoid system that will allow operations without visual observers to enable drones to operate at greater distances safely while avoiding other aircraft, people, pets and obstacles.

About nine years ago, Amazon first floated the idea of using unmanned aerial systems (UAMs) to deliver packages to the doorsteps of consumers. At that time, it was scoffed at as a pipe dream considering the aerospace devices were used by hobbyists only.

In the years that followed, Walmart, UPS and FedEx have all began their own drone projects for delivery of packages as well as groceries and healthcare items. In April, Wing, the drone delivery arm of Alphabet, started the first metroplex operations in Texas for delivery after passing the 200,000 delivery threshold for goods, food, groceries, healthcare and more.

Even larger projects have been conducted by startups that are quickly controlling the drone delivery market. This includes the first city-wide delivery network planned for Switzerland from Matternet; and Flytrex’s delivery service in the Dallas-Fort Worth area.