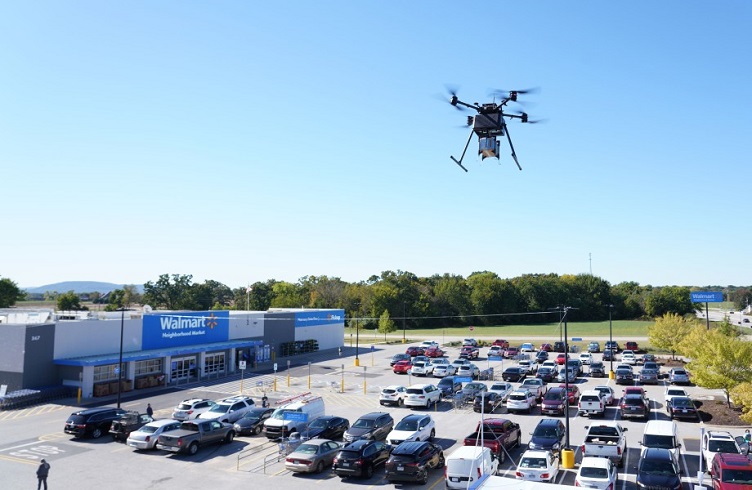 Customers in six states can get items up to 10 pounds delivered in about 30 minutes. Source: Walmart

Walmart is expanding its operations with drone delivery operator DroneUp that will eventually reach 4 million U.S. households across six states.

The expansion will create a network of 34 drone sites by the end of the year in Arizona, Arkansas, Florida, Texas, Utah and Virginia. Walmart said this will allow it to deliver more than 1 million packages by drone in a year.

Customers in these areas will be able to order from thousands of items from local Walmart stores including medical items, diapers, food and more and have it delivered in about 30 minutes with a $3.99 delivery fee. Customers will be allowed to order items totaling 10 pounds.

Walmart has been testing drone deliveries for more than a year and late in 2021, the company expanded drone delivery with projects from DroneUp and Zipline. At the time, the goal was to test how multiple operations can provide delivery of thousands of items in a smaller area. It would pave the way for this expansion to six states and 34 delivery sites.

DroneUp said that completing hundreds of deliveries in the past months has shown a practical use for using drones to get items fast to customers.

After completing hundreds of deliveries within a matter of months across existing DroneUp hubs, Walmart has seen firsthand how drones can offer a practical solution for getting certain items fast. While Walmart initially thought customers would use the service for emergency items, the company finds they use it for its sheer convenience, like a quick fix for a weeknight meal. Case in point: the top-selling item at one of the current hubs is Hamburger Helper.

Walmart said it plans to scale its drone infrastructure and expand its drone technology to enable other businesses to explore how to use the technology for their benefit. Additionally, the companies will work with local municipalities for aerial drone solutions such as insurance, emergency response and real estate.

“We’ll be able to deploy a drone for aerial inspection, or rapidly deploy drones for a first responder or public safety support in a way that hasn’t been available before,” said Tom Walker, founder of DroneUp. “These hubs will be manned and ready to go, with the ability to get a drone in the air in a minute.”