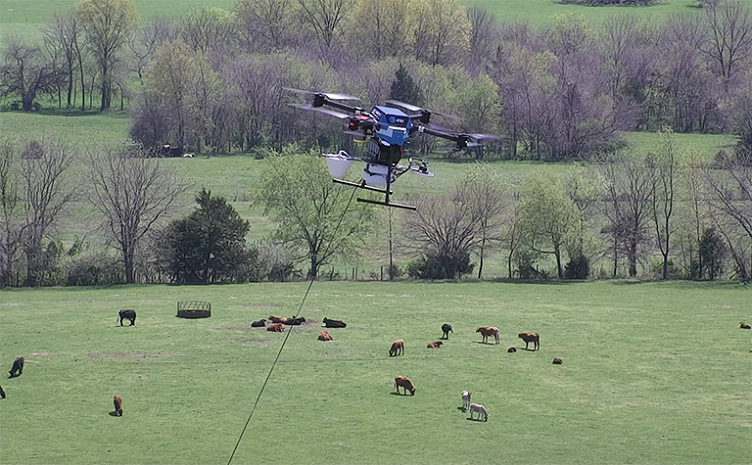 A drone that is tethered with a cable that connects 5G network over remote locations. Source: AT&T

AT&T is testing how to transmit 5G networks via drones in a new project called Flying Cow.

What AT&T calls an industry first, the company picked a rural Missouri location with no trees, no houses, no humans and only wide-open spaces.

“We had intermittent, weak LTE signal at the flight location before we launched the 5G Flying COW,” said Ethan Hunt, Unmanned Aircraft Systems (UAS) principal program manager at AT&T. “We flew the drone up to about 300 feet, turned on the signal and it began transmitting strong 5G coverage to approximately 10 square miles.”

Customers with a capable 5G smartphone could have gone from no service to super-fast wireless connections in seconds. AT&T said this could help first responders with search and rescue missions or during natural disasters when communication networks go down, the drones could establish a temporary network for victims and survivors.

AT&T said 5G allows new capabilities for remote networks and allows a large number of devices with 5G but it is a better seamless experience, better network performance and overall better performance.

The company said it is working to autonomously fly drones without tethers for months without landing and using solar power to provide secure, reliable and fast 5G connectivity to large numbers of users over wide geographic areas. One day it could help to bring broadband connectivity to rural and other underserved markets across the U.S.

The 5G network over drones is one of a few projects AT&T is working on.

The company is also testing beyond the visual line of sight (BVLOS) flight operations, which would allow the pilot to operate a drone from a completely different location. Currently, an AT&T flight control system allows operators and tethered Flying COWs to be separated by thousands of miles.

While some companies are currently testing BVLOS using 4G wireless networks, the advent of 5G, the next-generation wireless technology, may accelerate the development of BVLOS as the technology would allow for intelligent identification and tracking of objects through cloud computing. One such project has already started with Ericsson and Australian telecom Optus with the first teleoperated drone flight.

Another project involves RoboDogs that can be used for search and rescue, bomb disablement and more. AT&T is working to improve connectivity for these devices by outfitting them with 5G technology.