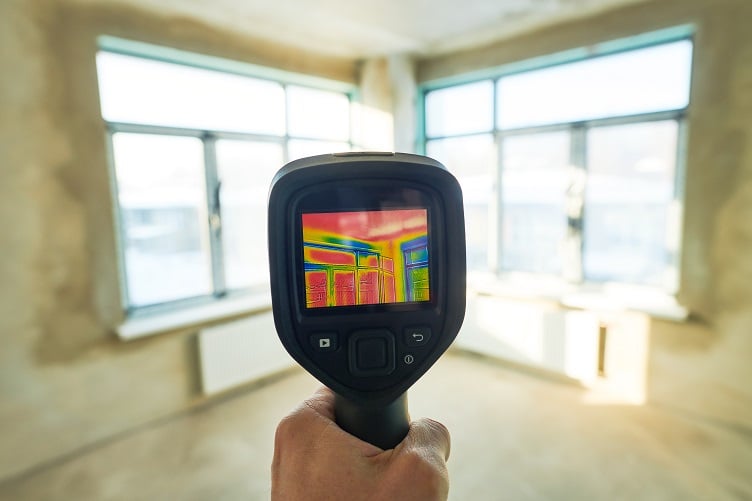 Pyrometers can be used for a variety of applications such as thermal imaging cameras. Source: AdobeStock

Applications involving process control and equipment functionality are closely linked to temperature. From a thermodynamic standpoint, a change in molecular motion due to heat being added or removed from a system causes changes in temperature. Temperature changes affect various properties differently, which makes heating and cooling control essential aspects of optimized functionality. This goes beyond simply hot, neutral, or cold and instead constitutes quantifying temperature fluctuations with accurate measurements based on how a particular property varies.

Target use of thermal variation modeling in temperature sensors. Source: Ross-Pinnock and Maropoulos

As mentioned previously, temperature sensors can be either contact or non-contact. Contact temperature sensors are in contact with the object and measure temperature using the predictive method. In other words, these devices assume that the sensor and object are in thermal equilibrium. Examples of contact sensors include:

Non-contact sensors aren’t in contact with the medium being measured and use convection or radiation to measure its surface temperature. The principle behind this technique is based on the infrared ray emitted by the object. This infrared ray is the portion of the electromagnetic spectrum that lies behind visible light and radio waves. By knowing that all bodies with a temperature above 0 degrees Kelvin radiate infrared energy and applying the Stefan-Boltzmann Law for radiated energy, it’s possible to calculate the rate of heat loss by radiant emission.

Examples of non-contact temperature sensors are:

The most common RTD used in industrial settings is the PT100 made with platinum and has a temperature range of -250 degrees Celsius to 850 degrees Celsius. As a passive sensor, RTDs require acceptable current excitation levels that will not alter temperature and introduce an error. A voltage output

Thermocouples are contact temperature measuring devices that consist of two junctions of dissimilar materials welded together. One junction is kept at the reference temperature (cold), while the other is placed at the measuring medium (hot). Temperature differences between both ends of the junction cause an electric current to flow through the thermocouple. The strength of the current is used to determine the temperature of the medium being measured. 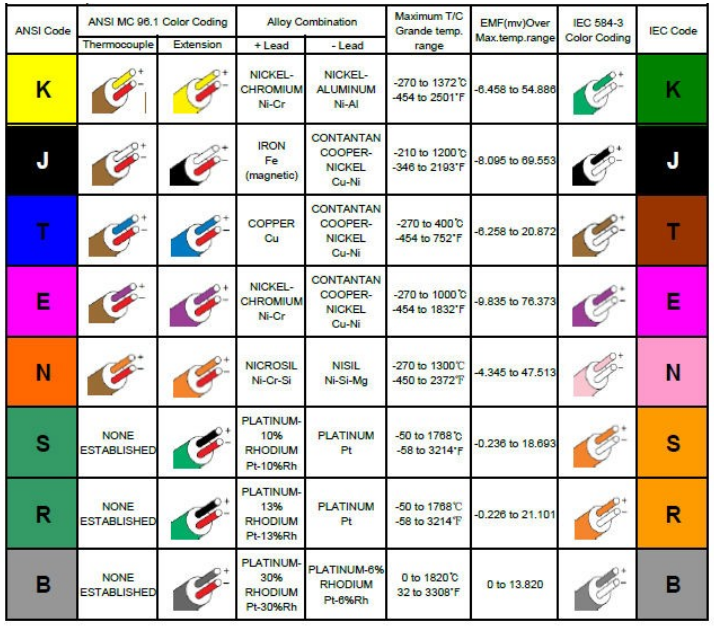 Types of thermocouples with color and temperature designation. Source: Watelectrical

Thermistors exhibit a non-linear change in resistance that can be linearized with shunting with a fixed resistor. They are constructed from solid-semiconductor materials and are rated according to power rating, resistive value and time constant. 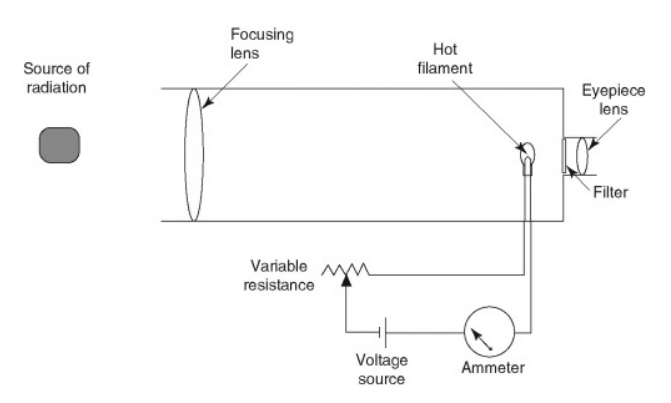 Pyrometers have the advantage of not being in contact with an actual surface to measure temperature. Examples of use include monitoring the mains supply unit or measuring the surface temperature of components within specific machines.

Fiber-optic temperature sensors are non-contact devices suited for applications where specific activities are likely to interfere with sensor functionality. For example, in industries where radio frequency interference (RFI) and electromagnetic interference (EMI) can affect operations such as explosion-proof areas or critical turbine areas in power plants. Other applications where fiber optic temperature sensors are used include the semiconductor industry, plastics processing, automated welding, which is known to generate large amounts of electric fields.

Different types of fiber optic temperature sensors exist on the market. One type uses gallium arsenide crystal (GaAs) semiconductor by taking advantage of its material properties in blackbody physics. It's possible to determine the wavelengths and temperature that cause an absorption shift due to the semiconducting crystal's predictable characteristics.

Contact a non-contact sensors can be used for different applications depending on the targeted temperature range, metal alloy used to measure temperature sensitivities, environment and cost. From well-known PT100 to more advanced fiber-optic temperature sensors, molecular motion across a medium is being measured with various technologies.

Janeita Reid is a civil and wind energy engineer, living in Belgium and originally from Jamaica. She is involved in research about aerodynamic airfoil optimization with discrete adjoints. Through technical writing, she hopes to boost renewable energy deployment worldwide in a transparent, cost-effective, and innovative manner.