What sensors are in a weather station? 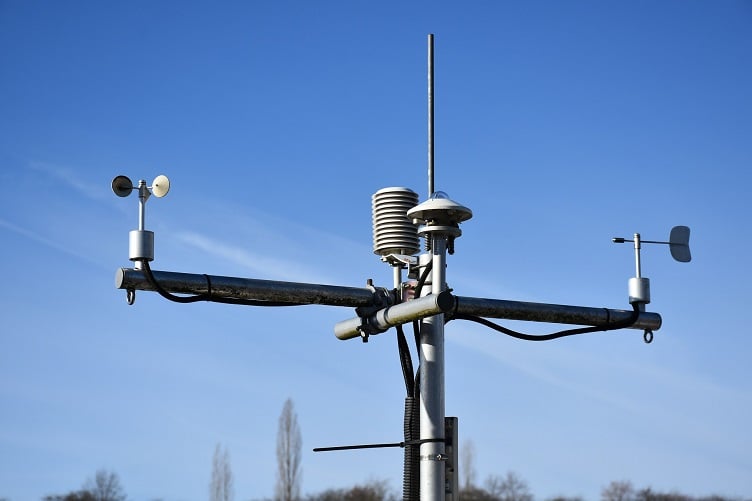 A weather station equipped with an anemometer. More weather stations are being built with sensors attached to more accurately record conditions. Source: Pixabay

Weather stations have been growing in popularity. The ability to track the weather at one’s home, as well as contribute the data to large weather data warehouses, such as AmbientWeather.com or Wunderground.com have contributed to this rise in popularity.

Furthermore, the ease of installation and setup have improved over the past few years.

The Automatic Weather Station (AWS) has several key components. It has the sensor group, which measures the weather phenomena, the display, which is located nearby to show the weather data, the wireless transmitter for relaying data to the display (and possibly an internet bridge) and the power system, which often consists of rechargeable batteries and a small solar panel.

The sensor group can vary between AWS models, but in general, there are sensors for temperature, relative humidity, atmospheric pressure, wind and rain. Other models will include solar flux, UV index, air quality, lightning detection and others. This article will focus on the primary sensors.

The most basic measurement of all is temperature. When it comes to the weather, people want to know whether to put on a coat or short sleeved shirts, with all other measurements being secondary.

Temperature measurements are performed in one of three ways, depending on the station, though all methods are electrical in nature. Thermocouples, resistance temperature detectors (RTDs) and thermistors are the most used temperature sensing devices.

Thermocouples take advantage of the Seebeck effect, where dissimilar metals in direct contact on one end will generate a voltage at the other end. This voltage varies linearly with temperature.

RTDs, such as the Pt100, are very accurate temperature sensors. As temperature changes, the resistance of materials changes. For platinum, this resistance is linear at all reasonable weather temperatures. The weather station measures the voltage in a Wheatstone bridge circuit that changes to reflect the change in resistance, which changes with respect to the temperature.

Thermistors are a semiconductor temperature sensing device. These are perhaps the most common temperature sensors, as they can be made cost-effectively without subtracting accuracy. They use very little power, which is extremely important for weather stations mounted in remote areas.

The diagram shows a weather station conditions and the density of weather stations in Rio Rancho and northwestern Albuquerque, New Mexico. Source: Wundeground

The most common method of measuring relative humidity is using a hygrometer. A hygrometer consists of a hygroscopic polymer that absorbs moisture from the air. The electrical resistance of the polymer is measured; the higher the humidity, the more moisture is absorbed and the lower the resistance.

For diaphragm models, a small, flexible material is outfitted with a strain gauge, which changes electrical resistance as the diaphragm stretches in response to pressure. Some piezoelectric models also have a strain gauge for added sensitivity.

How strong is the altitude effect on air pressure? Category 5 Hurricane Wilma in 2005 was the lowest pressure ever recorded in a hurricane, where low pressure is the defining feature. This monster storm produced a low pressure of 882 mb, or 32 mb higher pressure than the average day in Denver, Colorado..

Most pressure sensors will report absolute pressure but are then adjusted in software to reflect relative pressure.

Wind sensing is divided into two pieces: speed and direction. Components are paired together and must be placed out of the way of interfering objects that might block the wind flow from specific directions.

Wind direction is measured by an aerovane. An aerovane has a pointer and a fin on a set of bearings. When the wind blows, the fin is blown to provide the least resistance, causing the pointer to point to the source region of the wind. Wind direction is always reported from the direction the wind comes from, not where it is going to. To record this value electronically, the aerovane is attached to a rotary encoder.

This encoder must be oriented to true north, and the output of the aerovane will be in degrees, where zero degrees is true north. If magnetic north is used for calibration (as often happens with home installations) the wind direction will be with respect to magnetic north.

Most home weather stations, as well as official National Weather Service (NWS) stations use a “tipping bucket” method for measuring rainfall. In a tipping bucket weather station, a funnel catches rainwater over a large area and drops it into one side of a two-sided cup. The two-sided cup is balanced on a fulcrum. As the rain accumulates on one side of the cup, it tilts on the fulcrum, exposing the second side of the cup to the funnel, and slowly draining the first side. A reed switch counts the number of “tips.” Because each tip represents a small quantity of rain (typically 0.01 inch), the number of tips can be easily multiplied to find the total rainfall.

Tipping bucket rain gauges have a small level built into them, as they must be level to operate correctly. Because of this, they are often hard mounted to a surface to keep them from being knocked out of level by the wind.