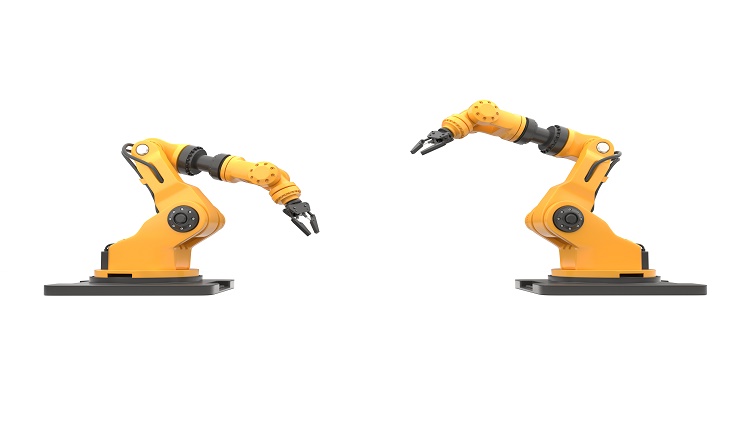 Throughout history, robots have been aimed at improving manufacturing through automating repetitive mechanical motion. In a typical set up, industrial robots are controlled by a set of programmed movements, reasoning and sensing as needed for a specific action. These set ups blindly reached toward a location and grasped the desired object and moved it to another pre-approved location. Robotic technology has improved over time to increase efficiency and production and save money throughout the manufacturing process.

Machine vision is what drives most modern robots that are used for inspection and localization of areas of work. Simple machines were used in the beginning for basic surface features or flaws. If flaws were found on a product, it was rejected. If the features were analyzed, they were used for localization. Machine vision has greatly improved automation and robot technology where controlled, easy-to-use repetitive tasks are involved. This is where a new development in sensor technology from OMRON comes in.

OMRON, a company based in Kyoto, Japan, has recently announced the creation of a new sensor called the FH-SMD Series 3D Vision Sensor. This particular sensor can be attached to a robot with the purpose of recognizing bulk automotive parts that are randomly placed. It can scan areas in three dimensions, allowing for easier inspection and assembly of parts, space saving, and pick and place motion, which is considered difficult for “normal” robots, whatever a normal robot is! Due to this improved functionality, the new sensor makes these robots more productive and efficient than previous models used for this application. This is how OMRON and other companies are advancing the manufacturing field with solutions that involve the combination of automation devices and robots.

Finding reliable and efficient production workers is becoming a difficult task. The cost of labor has risen significantly, and manufacturers are now being pressured to move as many processes as possible over to automation. This can be achieved by mimicking the movements of experienced human workers with automated robots. The influx of automation also changes the role of the human workers who now need to work alongside and integrate their workflow with robots, especially during the COVID-19 pandemic. The automotive industry is an example of a field that needs vision sensors to work as the eyes of robots, as such robots require vision when navigating complicated and oddly positioned parts. Existing 3D vision sensors take quite a while to detect objects and targets in their way, while also being quite large and requiring a lot of mounting space. This can create problems where space is not so plentiful and automation that performs at human-level is required.

Another way to provide robots, especially in the automotive sector, with sight is with a special system that mimics the way humans see. This fills the same need as the above OMRON sensor, and consists of an industrial camera that is attached to an existing robot arm to capture images, and a completely separate industrial computer that processes the images and controls the robot.

Due to the need for a smaller, lower cost option for robot vision guidance, this assembly of somewhat standard parts was formed. Vision algorithms applied to the robot’s vision guidance system process the images similar to how the human visual cortex functions. From the captured 2D images, this system can extract the X, Y, Z, Rx, Ry and Rz, along with the orientation of the part. The robot is then able to program a path from the obtained data and continue working efficiently.

Information and data from actual human brain function has gone into designing these algorithms, along with the point of view of humans, and these have been converted into the software realm. The whole system has been designed to be self-contained and easy to be retrofitted directly onto existing equipment. ADLINK has produced the Robeye All-In-One (RAIO) with Recognition Robotics using this very system. This specific system takes advantage of some high-tech equipment, paired with some of ADLINK’s wizardry, and 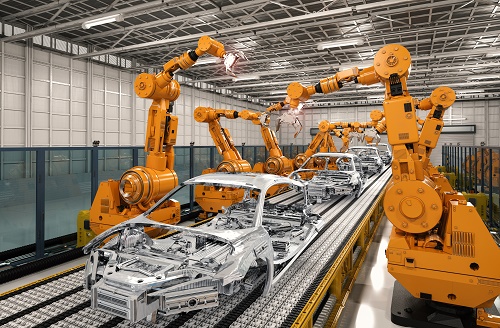 Vehicle assembly lines utilize robot vision guidance systems to ensure the assembly is as precise as possible. Source: phonlamaiphoto/Adobe Stockresulted in a convenient, low-cost solution. This particular product was designed specifically for use in automotive assembly lines, picking car body panels off of racks and being accurate enough to place the panel straight onto the car. This is part of the body-in-white assembly process of the vehicle, where the robot assembly lines have to be extremely precise. This is a job that was previously done by humans, but as robots do not tire, or complain for that matter, it was an easy decision to automate these tasks.

Humans and robots, as mentioned previously, will now have to work together in the same workplace and workflow, and due to this robots will be able to help out their human operators. Robots and artificial intelligence (AI) are becoming increasingly good at a lot of “human” jobs. They are now translating languages, diagnosing diseases and providing customer service. This field is rapidly advancing and is changing how work is done and who is doing it. Contrary to many fears in recent times, robots will not be taking over the world any time soon, but they will continue to augment and complement humans in the workplace and beyond. Significant performance improvements have been seen in this study, when machines and humans work together. Soon it will be the companies who fail to avail of AI and robots that will be left behind.

What do you think of this new technology? Have you used something like this in your line of work? Or maybe this inspires something new for you! Let us know in the comments.