A new strain gauge with voltage and resistance measurement capabilities has recently been introduced by VTI Instruments, a brand of San Diego-based AMETEK Programmable Power.

Strain gauges are measuring elements that convert mechanical strain into an electrical signal. They work by offering electrical resistance to applied strain, which is then converted to absolute voltages by a circuit known as a Wheatstone bridge. Strain gauges represent the most universally used measuring devices for electrical measurement of mechanical qualities. 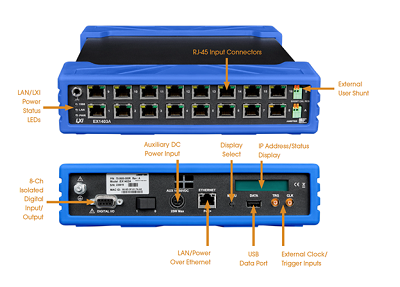 Such benefits have a direct impact upon scalability. The device integrates extended functions, as defined in the LAN extensions for instrumentation (LXI) specifications, to provide box-to-box synchronization for precise correlation of acquired data. Time stamping of data with IEEE-1588 codes simplifies inter-module communication and flexible triggering options over Ethernet, eliminating the overhead normally attributed to application software running on a host controller.

At the same time, the IEEE-1588 v2 PTP standard provides an architecture that can be scaled from tens to thousands of channels. Multiple instruments can be distributed extremely close to measurement points of interest, reducing the run length of analog cabling and minimizes errors induced by noisy environments. PoE also enables a single cable to be used for both power and data capture.