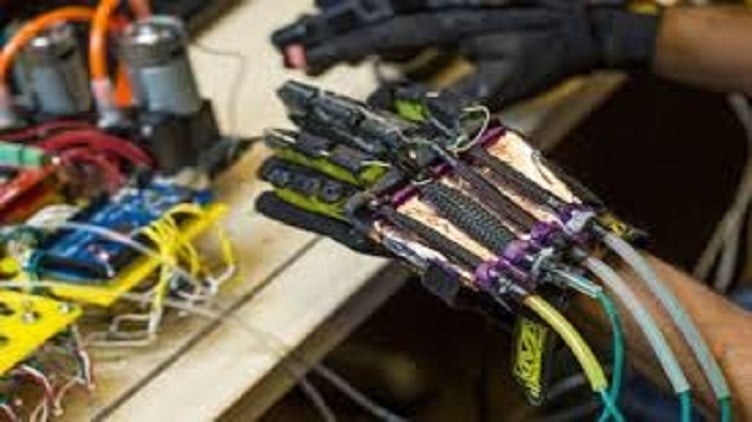 The demand for soft electronic and flexible products is growing. For instance, flexible strain sensors are required for a broad variety of applications such as soft robotics, human motion detection, customized health-monitoring, human-machine frameworks and similar systems. This article will introduce these sensors, their types, their sensing mechanisms and finally their applications.

Flexible strain sensors mainly translate mechanical distortions into electrical signals. There are different types of strain sensors such as liquid metal, Raman shift and triboelectric, but these exhibit poor dynamic performance, have low resolution and do not have a sophisticated measurement apparatus. Therefore, strain sensors that are capacitive or resistive are more commonly used as flexible strain sensors. They offer higher stretchability, flexibility and comparatively uncomplicated readout systems.

In resistive type sensors, the flexible substrates are generally combined with electrically conductive sensing films. As composite systems are strained, changes in microstructures in sensing films contribute to electric resistance changes depending on the strain applied. The restoration of the sensory films to their default states, after releasing the strain, would restore the resistance of the flexible strain sensors. The capacitive flexible strain sensors use an extremely compatible dielectric layer wedged in between a set of flexible electrodes. The applied strain closes the two electrodes and leads to a capacitance increase.

Strain sensors adapt to the tensile strain using various techniques, according to the micro/nanostructures, material types and manufacturing process. The response to strain-resistance of conventional strain gauges derives from material piezoresistivity and geometric influences. In contrast to conventional pressure gauges, mechanisms like the disconnection of sensor components, the tunneling effect and the propagation of a crack in thin films have been used to create flexible strain sensors.

The piezoresistivity effect is the resistance changes of materials due to the deformations in the structure of the sensors. Piezoresistivity of some metal alloys and metals can cause a slight rise in the resistance of a strain gauge while semiconductors like germanium and silicon can cause a major increase in the sensor resistance due to the shift of the inter-atomic spacing bandgap. Furthermore, nanoscale materials including the zinc oxide nanowire (ZnONW) and single carbon nanotube (CNT) demonstrate exceptionally high piezoresistivity due to alterations in barrier height and their chirality, respectively. Extremely sensitive strain gauges may also be obtained by nanoscale materials or semiconductors.

As materials are strained, they appear to compress cross-directionally depending on a factor called Poisson’s Ratio. The resistance of a conductor is calculated using R= ρL/A, where A represents a cross-sectional conductor area, L is the conductor length and ρ is electrical resistivity. Therefore, when the length of flexible sensors is elongated and/or its cross-sectional area is reduced, resistance will increase. These dimensional changes happen in both capacitive type flexible sensors and resistive type sensors that are based on metals. In capacitive-type sensors, the capacitive area is changed when the sensors are stretched. If the spacing of the dielectric layer is decreased due to the tensile strain, it will increase the capacitance.

Tunneling is the passing of the electrons via a non-conductive barrier. Electrons will tunnel via the neighboring tightly spaced nanomaterials. In CNT-polymer nanocomposites, extremely thin shielding polymer layers have been found empirically. In the experiments, many CNT-CNT intersections were disconnected from explicit electrical connections, however, the potential for conduction via tunneling effect was maintained. Electrons can cross thin layers of the polymer at a specific cut-off spacing among adjacent nanomaterials and create a quantum tunnel junction.

When the flexible strain sensors are stretched, cracks are created and propagated by fragile thin films deposited on the surface of flexible layers of polymer. In reality, the cracks aim to relieve the accommodated stress by initiating at the stress-concentrated regions. Upon stretching, microcracks have been found to develop in silver nanoparticle (AgNP), CNT, graphene thin films and gold nanowire (AuNW) deposited on flexible substrates. The electrical conduction via thin films can also be critically limited due to the segregation of many microcrack edges. Also, the resistance of thin films can be improved significantly by the applied strain. This method has been used for the production of flexible and highly sensitive strain sensors.

Flexible strain sensors have many potential uses particularly in the field of soft electronics. For instance, low-strain gauges can be used for mass measurement, systemic health tracking and pressure sensing. Alternately, extremely stretchable and adaptive strain sensors may be used as electronic instruments for body integration. They may be explicitly laminated on the human skin or applied to probes for calculating body tension from minor movements of the skin. These minor skin motions can be produced by the heartbeat or respiration process. Moreover, body strain from large skin movements such as straightening/bending of joints of the body can also be measured. Flexible strain sensors will also be useful for monitoring the strain in robotics with soft-bodies.