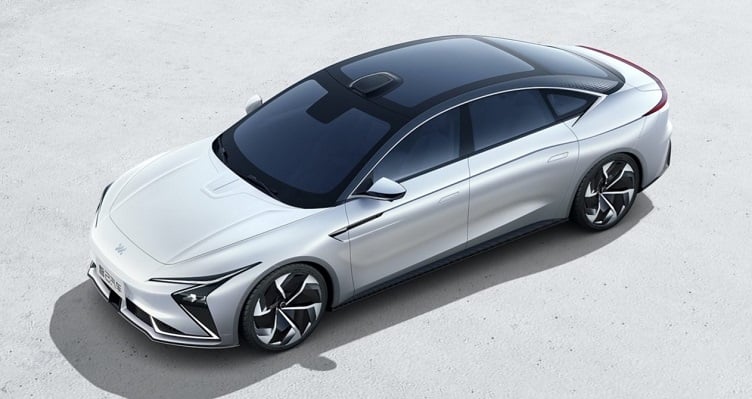 SAIC's long-range vehicles will include artificial intelligence capabilities to help with autonomous parking and other automated driving features. Source: SAIC

Nvidia has announced that four Chinese electric vehicle (EV) manufacturers will use its Drive compute platform for its future all-electric cars.

SAIC, NIO, Li Auto and Xpeng are all developing a smart, electric fleet using the Drive technology as the centralized computer system.

SAIC, one of the largest automakers in China, is working with retailer Alibaba for the first two EVs in its lineup, a sedan and an SUV. The long-range vehicles will include artificial intelligence (AI) capabilities to help with autonomous parking and other automated driving features. The vehicles will have a 93 kWh battery that will come standard in the two cars.

Nvidia said SAIC’s EVs will have multiple Nvidia Orin system-on-chips at its core for 500 to 1,000 trillion operations per second (TOPS) of performance for automated and self-driving features as well as in-cabin personalization.

SAIC said it will begin taking orders for the sedan at the Shanghai Auto Show in April with the SUV coming in 2022.

NIO announced it will use the Drive Orin as the core of its Adam computer that will power its EVs. The computer will be able to operate at 1,000 TOPS and enable personalization in the vehicle such as learning driving habits and preferences. The computer will be added to its flagship vehicle, the ET7 sedan, slated to begin production in 2022 and will be included in every NIO model moving forward.

NIO said the ET7 will have more than 600 miles of battery range and autonomous driving capabilities including point-to-point autonomy, leveraging 33 sensors.

Li Auto’s next generation of EVs will be developed in collaboration with Desay SV and include self-driving features as well as extended battery range.